“For it is not those who hear the law who are righteous in God’s sight, but it is those who obey the law who will be declared righteous.” (Rms 2:13, NIV)

What?! Anyone acquainted with Paul’s gospel of grace will do a double-take right there! Is Paul really preaching righteousness through the law? There must be something wrong with my translation. Let’s try King Jimmy:

Really?! At first glance this seems to contradict everything Paul says elsewhere about the law (it condemns, not justifies) and righteousness (it’s a gift and cannot be earned). Has Paul done an about-face and decided grace is no longer enough? If so, he would have to send a letter to the Galatians retracting what he earlier told them:

“Know that a man is not justified by observing the law, but by faith in Jesus Christ.” (Gal 2:16)

“…if righteousness could be gained through the law, Christ died for nothing!” (Gal 2:21)

Neither do we need fear that Paul is sending a different message to the Romans, for he goes on to conclude:

Again, the key to rightly dividing any scripture is to ask two simple questions: (i) what does this mean in light of the finished work of the cross? and (ii) who is the writer addressing or talking about? It is through the cross – not the law – that God makes provision for our righteousness, and this gift is received by faith from first to last (Rms 1:17). Okay, so who is Paul talking about in Romans 2? Here he is describing two kinds of sinners:

To put that in modern terms, we might define the first group as those who think, “I’m basically a good person,” and the second group as those who say, “I try to do the right thing.” Those in group 1 have clear consciences while those in group 2 are busy with religious activity. Paul’s point is that both groups are lost. The issue is not law-keeping at all, but sin…

It is human nature to compare ourselves with others (“I’m not perfect, but at least I’m better than that guy”), but God shows no partiality (Rms 2:11). Some people sin without the law, others sin under the law, but “all have sinned and fallen short of the glory of God” (Rms 3:23).

Two interpretations for the price of one!

There are two ways to interpret Romans 2:13. The wrong way is, “if you do the law you will be justified.” This is an impossible challenge. Even if by some miracle you were able to keep the whole law from today onwards, how would you account for the sins of your past? 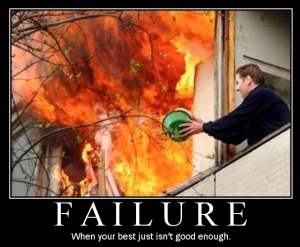 But you don’t have to worry about that because there is no chance you would be able to keep the law anyway. Try and you’re guaranteed to fail. This is because the law has been divinely engineered to stimulate sin (Rms 5:20). If you are a sinner, the law will tell you what not to do and then create a desire to do exactly that! God never gave us the law so that we might know how to behave. He gave it so that we might have knowledge of sin and be silenced by guilt (Rms 3:19-20).

The right way to interpret Paul in Romans 2:13 is, “having the law is not enough, you have to keep it – and none of you can!” It is impossible for imperfect man to deliver a lifetime of perfect performance. Paul is not calling us to attempt the impossible; he’s trying to get us to face reality and admit defeat. There is no hope for those who try to keep the law:

“Therefore, by the deeds of the law no flesh will be justified in His sight…” (Rms 3:20)

Why is failure the inevitable consequence of trying to do the right thing? Because the law is perfect and we’re not! We’re born sinners on account of first Adam. We’re not sinners because we sin; we sin because we’re operating in unprofitable flesh and living in a corrupt and polluted world! The law doesn’t generate sin, it merely reveals that we have a problem bigger than we can solve.

But thank God for “last Adam”! Jesus, the man from heaven, is not part of Adam’s sinful race. Jesus was the only one who could keep the law and He did so on our behalf. This was the reason He came:

“Do not think that I came to destroy the Law and the Prophets. I did not come to destroy but to fulfill.” (Mt 5:17)

Jesus is the Doer of the Law

The Jews thought they were on the inside track because they had the law, but they weren’t keeping it. At their best, they were holding to a watered-down, humanistic version of the law. Jesus fixed that by preaching the pristine standard of the law. In the Sermon on the Mount Jesus explained that God requires perfection and nothing less:

“Be perfect, therefore, as your heavenly Father is perfect.” (Mt 5:48)

To those under the law, Jesus preached the perfect law to accentuate imperfect humanity’s need for a perfect Savior. This is the exact same message that Paul preached. Like Jesus, Paul esteemed the law saying it was holy, righteous and good (Rms 7:12). But Paul never said we should try and live by it. If you try to earn favor with God by keeping the 10 Commandments, you’ve straight away broken the first one! No, the law was put in charge to lead us to Christ (Gal 2:24).  And if you are honest with your law-keeping religion, this is exactly where you will end up.

Jesus lived under the law, preached the law and ultimately fulfilled all the requirements of the law on our behalf.

“For what the law could not do in that it was weak through the flesh, God did by sending His own Son in the likeness of sinful flesh, on account of sin: He condemned sin in the flesh, that the righteous requirement of the law might be fulfilled in us who do not walk according to the flesh but according to the Spirit.” (Rms 8:3-4)

Jesus never broke the law and He never will. So guess what happens when you put your faith in Christ and allow Him to live through you? Without even trying you will find yourself keeping the law. Before you were born again (of the spirit) you sowed to the flesh and reaped corruption. No matter how hard you tried, you could not consistently live right.Your old man just couldn’t do it. But now you have new life – His life – complete with new desires – His desires. You’re no longer trying to become righteous; you have received Him and His righteousness. As you allow Him to express His life through yours, you will find everything you do is righteous because He is the vine and you are bearing His righteous fruit.

Paul said, “the doers of the law shall be justified” knowing full well that no one – except those who are already justified – can do the law. How can imperfect man attain the perfect standard that God demands? He can’t. But Jesus can and has. He became for us wisdom from God – our righteousness, holiness and redemption. And by His perfect sacrifice this High Priest has made us “perfect forever” (Heb 10:14).

Let him who boasts boast in the Lord!

Leave a Reply to Theodore A. Jones Cancel reply