I’ve been reading a book about Charles Haddon Spurgeon (1834-1892), the Prince of Preachers. Spurgeon was saved at 15 and started preaching when he was 19 years old. By the time he died, at age 57, he had preached 3,600 sermons to around 10 million people and was England’s most popular preacher.

Spurgeon preached to as many as 10,000 people at a time, and did so without the aid of a microphone.

He battled with depression, never gave altar calls, and sold his published sermons for a penny. He pastored the world’s first megachurch, the Metropolitan Tabernacle in London. He helped Hudson Taylor develop the color-coded Wordless Book which was used for evangelism in China and is now found in Sunday Schools everywhere.

Being a prolific writer and communicator, Spurgeon ranks right up there with CS Lewis as one of the most quoted Christians in the English language. You can hardly go a week on Facebook or a year in church without running into a Spurgeon quote. But I wonder if there is one “king quote” that Spurgeon would choose above others. If the prodigious output of his entire life could be reduced to one mere sound bite, what would it be? I have two possible candidates for a defining quote. The first comes from the opening of the Metropolitan Tabernacle, on 18 March 1861, when Spurgeon said:

I would propose that the subject of the ministry in this house… shall be the person of JESUS CHRIST. I am never ashamed to avow myself a Calvinist; I do not hesitate to take the name of Baptist; but if I am asked what is my creed, I reply, ‘It is Jesus Christ.’

And the other quote comes from near the end of his ministry:

I sometimes wonder that you do not get tired of my preaching, because I do nothing but hammer away on this one nail. With me it is, year after year, ‘None but Jesus!’ Oh, you great saints, if you have outgrown the need of a sinner’s trust in the Lord Jesus, you have outgrown your sins, but you have also outgrown your grace, and your saintship has ruined you!

If the root of dead religion is an independent spirit, then the foundation of a grace-based life is utter dependence on Christ. We start our Christian walk dependent on Christ and then mature to become ever more dependent on Him. As Spurgeon says, to outgrow your “sinner’s trust” in the Lord is to outgrow grace and be ruined.

Another Prince of preachers has famously said that the best way to determine whether grace preaching is doctrinally sound is that “it always reveals more and more of Jesus.”  You cannot preach grace without preaching Jesus and you cannot preach Jesus without preaching grace. By that measure Spurgeon must’ve been one of the greatest grace preachers around, for even after years of preaching, it was still “none but Jesus!”

Spurgeon is known for a lot of things. But judging by some of the quotes I’ve come across, it seems that his message of grace has not been widely heard. So to give you a taste, here are some of Spurgeon’s very best quotes on the subject of grace:

1. “When God accepts a sinner, He is, in fact, only accepting Christ. He looks into the sinner’s eyes, and He sees His own dear Son’s image there, and He takes him in.”

2. “No doctrine is so calculated to preserve a man from sin as the doctrine of the grace of God. Those who have called it ‘a licentious doctrine’ did not know anything about it. Poor ignorant things, they little knew that their own vile stuff was the most licentious doctrine under heaven. If they knew the grace of God in truth, they would soon see that there is no preservative from lying like a knowledge that we are elect of God from the foundation of the world. There is nothing like a belief in my eternal perseverance, and the immutability of my Father’s affection, which can keep me near to Him from a motive of simple gratitude.”

3. “Born, as all of us are by nature, an Arminian, I still believed the old things I had heard continually from the pulpit, and did not see the grace of God. When I was coming to Christ, I thought I was doing it all myself, and though I sought the Lord earnestly, I had no idea the Lord was seeking me.”

5. “God never punishes his children in the sense of avenging justice. He chastens as a father does his child, but he never punishes his redeemed as a judge does a criminal. It is unjust to exact punishment from redeemed souls since Christ has been punished in their place. How shall the Lord punish twice for one offense?”

6. “If we be married to Christ, and He be jealous of us, depend upon it this jealous husband will let none touch His spouse.”

7. “Grace puts its hand on the boasting mouth, and shuts it once for all.” 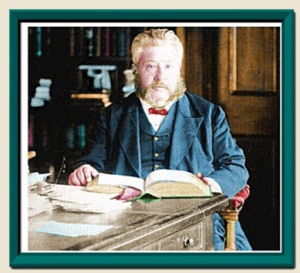 8. “If grace does not make us differ from other men, it is not the grace which God gives His elect.”

9. “We believe, that the work of regeneration, conversion, sanctification and faith, is not an act of man’s free will and power, but of the mighty, efficacious and irresistible grace of God.”

10. “The bridge of grace will bear your weight, brother. Thousands of big sinners have gone across that bridge, yea, tens of thousands have gone over it. Some have been the chief of sinners and some have come at the very last of their days but the arch has never yielded beneath their weight. I will go with them trusting to the same support. It will bear me over as it has for them.”

11. “If heaven were by merit, it would never be heaven to me, for if I were in it I should say, ‘I am sure I am here by mistake; I am sure this is not my place; I have no claim to it.’ But if it be of grace and not of works, then we may walk into heaven with boldness.”

12. “We hold that man is never so near grace as when he begins to feel he can do nothing at all.”

13. “From the Word of God I gather that damnation is all of man, from top to bottom, and salvation is all of grace, from first to last. He that perishes chooses to perish; but he that is saved is saved because God has chosen to save him.”

14. “I do not come into this pulpit hoping that perhaps somebody will of his own free will return to Christ. My hope lies in another quarter. I hope that my Master will lay hold of some of them and say, ‘You are mine, and you shall be mine. I claim you for myself.’ My hope arises from the freeness of grace, and not from the freedom of the will.”

15. “I believe the doctrine of election, because I am quite certain that, if God had not chosen me, I should never have chosen Him; and I am sure He chose me before I was born, or else He never would have chosen me afterwards; and He must have elected me for reasons unknown to me, for I never could find any reason in myself why He should have looked upon me with special love.”

16. “If the faith whereby I have laid hold on Christ to be my Savior be altogether wrought in me by the Holy Ghost through grace, then I defy the devil to take away that which he never gave me or to crush that which Jehovah Himself created in me. I defy my free will to fling what it never brought to me. What God has given, created, introduced, and established in the heart, He will maintain there.”

18. “In spiritual things, when God has raised a desire, He always gratifies it; hence the longing is prophetic of the blessing. In no case is the desire of the living thing excited to produce distress, but in order that it may seek and find satisfaction.”

20. “If one dear saint of God had perished, so might all; if one of the covenant ones be lost, so may all be; and then there is no gospel promise true, but the Bible is a lie, and there is nothing in it worth my acceptance. I will be an infidel at once when I can believe that a saint of God can ever fall finally. If God hath loved me once, then He will love me forever.”

Enjoy this article? Sign up to our free email list and we’ll notify you about new articles as soon they come out. No spam, we promise.

Help these messages of grace and mercy go further by supporting us via our Patreon page.

2 Comments on “None but Jesus!” Spurgeon on Grace