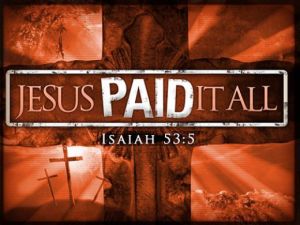 I get asked more questions about forgiveness than any other subject. “Am I really forgiven? What if I sin and don’t repent? What if I don’t confess? What if I backslide?” I have written numerous posts on all these points, but forgiveness seems to be a blind-spot for many. We just can’t get it into our heads that God might forgive us without any action on our part. That just sounds too good to be true. What are you trying to tell us? That God is good? That the gospel is actually good news?

If you’re uncertain about God’s forgiveness, your faith will be weak and unproductive. So to demolish any uncertainty, I want to ask a bold question: Are sinners forgiven? You would have to agree that if God has forgiven sinners, then surely He has forgiven Christians who don’t repent or who forget to confess some of their sins? By forgive, I mean to remit or send away our sins – something the Bible says happened at the cross. Here’s the punch-line: You are forgiven whether you believe it or not, but it won’t do you any good unless you believe it.

If we can see from scripture that sinners are forgiven, then just maybe we’ll be able to rest assured that we are forgiven too.

So are sinners forgiven? I’m going to call on four great prophets to answer this question. Here’s David:

As far as the east is from the west, so far has he removed our transgressions from us. (Ps 103:12)

When David sinned with Bathsheba, everyone knew about it. It was a public sin that led to death for at least two people and brought David pain and regret. He said, “I know my transgressions, and my sin is always before me” (51:3). By all rights, David should’ve been executed for his sin. The law covenant under which he lived had a legitimate claim on his life (Lev 20:10). But David appealed to the One who is greater than the law. “Have mercy upon me, O God, according to your loving-kindness” (Ps 51:1, NKJV). David was not trying to excuse his sin – he knew full well that he had done a terrible thing. But he had a revelation of a compassionate Father “who does not treat us as our sins deserve” (Ps 103:10). He asked God to “blot out my transgressions” (Ps 51:1), and through the prophet Isaiah, God said He would:

I, even I, am he who blots out your transgressions, for my own sake, and remembers your sins no more. (Isa 43:25)

Isaiah 42-45 is a four chapter advertisement for the new covenant. Isaiah 42 tells us about the coming Savior and Isaiah 43 tells us about the “new thing” that He will do. What is the new thing? “I will blot out your transgressions and remember your sins no more.” What an amazing new thing! Under the old covenant, sins were recorded and remembered (Lev 4-6). But under the new covenant they would be blotted out and remembered no more. Isaiah was not the only one to see this coming. Here’s Jeremiah:

This is the covenant I will make… I will forgive their wickedness and will remember their sins no more. (Jer 31:33-34)

Imagine hearing this while living under the old law covenant. I would’ve asked, “When, Lord? When will you do this great new thing?” Well by the time we get to Hebrews we learn that God has already done it. Jesus appeared “once for all… to do away with sin by the sacrifice of himself” (Heb 9:26). “When this priest had offered for all time one sacrifice for sins, He sat down” (Heb 10:12). When Jesus did away with all sin, the prophecies were fulfilled. Hebrews even quotes them just to make sure we don’t miss the connection: “Their sins and lawless acts I will remember no more” (Heb 10:17). Jesus didn’t die just for confessed and repented sins. He died for all sin. Just look at the words of our fourth prophet, John the Baptist:

The next day John saw Jesus coming toward him and said, “Look, the Lamb of God, who takes away the sin of the world!” (Joh 1:29)

Whose sin did Jesus take away? The sin of the world! Does the world include sinners? Yes! Then sinners are forgiven. Their sins are no longer being recorded:

All this is from God, who reconciled us to himself through Christ and gave us the ministry of reconciliation: that God was reconciling the world to himself in Christ, not counting men’s sins against them. (2 Cor 5:18-19)

Men have sins but God is neither counting them nor remembering them. How can you say such things! Sinners aren’t saved! I didn’t say they were. But they are forgiven:

When you were dead in your sins and in the uncircumcision of your sinful nature, God made you alive with Christ. He forgave us all our sins… (Col 2:13)

God doesn’t need your permission to forgive you. His forgiveness is entirely based on the finished work of the cross. Those who claim we must do stuff to be forgiven are saying that Jesus needs to come and die again, that once wasn’t enough. This is called bad news and it’s not in the Bible. Don’t believe it. Jesus didn’t die for some sin but all sin. His one-time sacrifice for the sin of the world was perfectly perfect and completely complete in every respect.

He is the atoning sacrifice for our sins, and not only for ours but also for the sins of the whole world. (1 Jhn 2:2)

Paul, you sound like you’re preaching universalism. I’m not – I’m telling you the same good news that the prophets foretold and the apostles declared: God the Son has done away with sin! Neither God the Father no God the Holy Spirit remembers our sins anymore! This is the gospel truth. Do you believe it?

Put your faith in the good news

Jesus said that forgiveness of sins is a gift that must be received (Acts 26:18). Two kinds of people will never receive this gift: (1) Those who don’t think they’re sinners in need of a Savior and (2) those who think they must do things like confess and repent to earn God’s forgiveness. (In case you’re wondering, 1 John 1:9 is directed to those in the first group – see 1 John 1:8.) The grace of God can only be received through faith (Eph 2:8). Everyone is forgiven but not everyone believes that they are forgiven. Those who don’t believe reject the gift that God offers them.

A proper response to this good news is to turn to God and put your trust in His amazing grace. This is called repentance. We don’t repent to get forgiven; we repent because we are forgiven. If you are still unsure about this, review the scriptures above and then tell yourself, “I am totally forgiven because of Jesus.” All the blessings that are ours in Christ – His acceptance, righteousness, holiness – flow from the revelation that we have been completely and eternally forgiven through the precious blood of the Lamb. See Jesus sitting down at the right hand of the Father. He’s not running around cleaning up your sins. His redemption work is done and He now invites you to enter His rest.

117 Comments on Are sinners forgiven too?