What is the most important lesson you have learned in life?

Your answer to this question defines your One Big Truth. Your One Big Truth is the truth you cling to when all is lost. It’s the backbone that helps you stand and the keel that keeps you on course. It’s the spark in your imagination, the drive in your engine, and the peace in your sleep.

Do you have a One Big Truth?

Perhaps you’ve never thought about this before. Then consider Puddleglum the Marsh-wiggle. Puddleglum is one of my favorite characters from the Chronicles of Narnia. He is grim, gloomy, and famously pessimistic: “There’s one good thing about being trapped down here – it’ll save funeral expenses.” But he’s a good wiggle in a storm. If you’ve read The Silver Chair by C.S. Lewis, you will know what I’m talking about.

Near the end of the story, Puddleglum and his friends Jill and Eustace find themselves trapped in the dark world of Underland. Using incense and lies, an evil enchantress tries to convince them that the world they’re looking for does not exist. Narnia is nothing but a make-believe world and Aslan a foolish dream. Jill and Eustace are bewitched but Puddleglum breaks the spell with a bold declaration:

Suppose we have only dreamed, or made up all those things… Suppose this black pit of a kingdom of yours is the only world. Well, it strikes me as a pretty poor one… That’s why I’m going to stand by the play-world. I’m on Aslan’s side even if there isn’t any Aslan to lead it. I’m going to live as like a Narnian as I can even if there isn’t any Narnia.

Puddleglum’s One Big Truth was that Aslan and Narnia were more real than the world he could see with his eyes. Acting on his conviction, Puddleglum refuted the witch’s lies, stomped on her fire, and saved the day.

As Puddleglum so brilliantly shows us, your One Big Truth is an undimmable light in a dark world. It’s an unbreakable bridge between where you are and where you are going. If Puddleglum had not been so sure of his One Big Truth, then all would’ve been lost. It is unlikely that he and his friends would have escaped the realm of Underland.

So what is your One Big Truth? What is your central belief? In my travels I have encountered several beliefs that people have adopted as their Big Truths. Here are four:

I suppose these are fine but they are not my One Big Truth. The difficulty I have with these is that all of them rely on me – my obedience, my attitude, my sacrifice, and my fruit-bearing – and I just don’t have that much faith in me. Like Puddleglum, my faith is in another. My backbone comes from Someone else.

What do you want to pass on to your kids?

Lately I’ve been asking myself, what is the one supreme lesson that I want my kids to learn from me? In other words, what is my One Big Truth? I’ll give you my answer in a minute but before I do, why don’t you pause and ask yourself that question. What is the single greatest insight that you would impart to those who come after you?

Have you got something?

Okay, here’s my One Big Truth: God loves us with an unfailing love. This is simply mind-blowing to me. Every form of love that you and I will experience in this world is failing love – it breaks, it wounds, it disappoints, and eventually it dies. I don’t mean to sound jaded – I’m not – but human love is inherently brittle. We were not designed to live off it.

But God’s love never, ever fails. Not ever! What does that mean? Jeremiah said His is an everlasting love (Jer 31:3). It doesn’t wear out or die. Paul said His love surpasses knowing (Eph 3:19). Your mind simply cannot grasp the extravagant magnitude of His love for you. Paul also said His love bears all things, believes all things, hopes all things, endures all things. This is the honest-to-God truth. God doesn’t love you with human love. He loves you with an unconditional and unfailing love (1 Cor 13:7). I guarantee you that you’ve never seen its like anywhere else!

God will never make you jump through hoops to earn His love. He won’t love you any more if you succeed and He won’t love you any less if you fail. If you lead millions to Christ or none at all He’ll love you just the same. He loved you into existence and He loved you while you were dead in sin (Rm 5:8). His love for you is unaffected by your obedience, your attitude, your sacrifices and your fruit. He loves you because He is love. But as awesome as God’s love is, it will have no effect on you unless you know it. It is knowing and being convinced about the truth that sets you free.

Think of the Prodigal Son. His father loved him the same at the beginning of the story as at the end. His love was without shadow or qualification. But the Prodigal didn’t know his father’s love until he was embraced. I am sure the father wanted to hug his son every day but the son wasn’t interested. In fact, the son wished his father was dead so he could get his hands on the old man’s money. Later he returned home because he thought he could earn favor by serving. Happily, he learned that the Father’s love is not for sale.

Jesus once said to the Pharisees, “I know that you do not have the love of God in your hearts” (Joh 5:42). Those who preach religious duty and obligation are unacquainted with the unfailing love of God. This is why they portray His love as brittle and conditional – they’re preaching what they know. If you listen to the lies of religion, then you will never know the unfailing and unconditional love of God. Religion cannot give you what religion does not have. 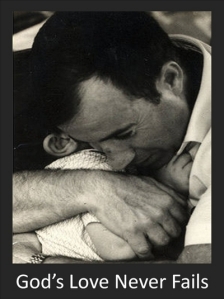 I hope that my kids turn out to be nothing like the Prodigal and his brother. But if they were to stray and end up in the pig pen, or worse, a works-based church(!), the one thing I hope they would remember above all else is that God loves them with an unfailing love. Religion would tell them that God is standing with crossed arms, but Grace declares His arms are always open. Religion says God is angry and maybe hates you, but Grace proclaims He is always in a good mood and His favor is on you. Religion says you need to get yourself sorted out and cleaned up before you can come home, but Grace shouts, “Come as you are!”

I can’t prepare my children for every possible lie and snare that this world might throw at them. Who knows what evil enchantress lies waiting around the corner? But if they know the unfailing love of their heavenly Father – if they know that Almighty God is for them – it won’t matter who comes against them.