What comes to mind when you hear the word “football”? Your answer to that question says a lot about where you come from. If you’re a fan of football and you travel the world you’ll often have conversations like this:

“So you like footy. Who’s your favorite team?”
“Collingwood.”
“Never heard of them. Do they play in the Bundesliga?”
“The Bundes-what-now?”

It’s a bit like that with the word “repentance.” Here on E2R there has been a lot of discussion lately regarding the purpose of repentance. Much of that discussion is like the conversation above. We’re all fans of repentance but we seem to be talking about completely different things.

So what is repentance? Like football, your answer to that question says a lot about where you’re coming from. If you’ve been raised under performance-based religion, repentance is something we must do to be saved. If you don’t repent, you’re not saved. What is the something we must we do? Turn from sin of course. But as I will explain, this is a limited and misleading interpretation of repentance.

The Greek word commonly translated repentance (metanoia) literally means to change your mind. (You can check this out for yourself by looking up a Greek lexicon such as Thayer’s and Smith’s Bible Dictionary or Vines Expository Dictionary of New Testament Words.) The Greek word for repent (metanoeo) is similar and both words are derived from the Greek word for mind (nous). So to repent is to change your mind. Nothing more, nothing less. Let’s look at an example from scripture:

Now that we know what repentance is (a change of mind), I want to address three common myths or misconceptions.

… repentance and forgiveness of sins will be preached in his name to all nations, beginning at Jerusalem. (Lk 24:47)

The religious mind reads this and thinks “I need to repent in order to be forgiven.” In other words, God will not forgive me unless I do something. This is pure hubris. It’s straight out of the old covenant. God is God and He has already forgiven in accordance with the riches of His grace (Eph 1:7). As I explain elsewhere, God does not need your permission to forgive you. We don’t repent to get forgiven; we repent because we are forgiven. Forgiveness is part of the good news: repent and believe it.

Myth 2: Repentance is turning from sin

Since repentance means changing your mind, it’s certainly possible that one can repent by turning from sin and there are plenty of people in the Bible who did so. But that’s only one kind of repentance and it is not the kind that leads to salvation. In the New Testament, repentance typically means turning to God.

I have declared to both Jews and Greeks that they must turn to God in repentance and have faith in our Lord Jesus. (Act 20:21)

Turning from versus turning to may seem like splitting hairs, but it’s the difference between life and death! Someone who turns to God automatically turns from sin and from their dead religious works, but someone who turns from sin does not automatically turn to God. This is why it is misleading and dangerous to preach repentance as “turning from sin.” Paul never did. “I preached that they should repent and turn to God” (Act 26:20). As usual, Paul took his lead from Jesus:

I have not come to call the righteous, but sinners to repentance. (Luk 5:32)

Again, the religious mind interprets this as a call to turn from sin but turning from sin doesn’t make you righteous. An unbeliever who turns from sin remains an unbeliever. Consider the Pharisees. They ran away anytime sin appeared. If anyone knew how to turn from sin they did yet Jesus called them sons of hell (Mt 23:15). Turning from sin will make you a moral person, but it won’t make you righteous. Righteousness comes to us through faith in Christ alone. 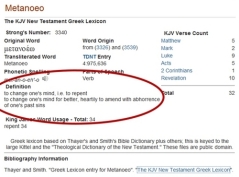 I appreciate that what I am saying about repentance contradicts reputable commentaries. So let’s take a look at one. To the right is a screenshot taken from BibleStudyTools.com showing Thayer’s and Smith’s definition of the word “repent.” (Click on the image to see a larger version.) You will see that they provide two definitions: (1) to change one’s mind and (2) to change one’s mind for better, heartily to amend with abhorrence of one’s past sins. Abhorrence is a strong word. It sounds like the experts are defining repentance as turning from sin. But do you see the problem? It is logically impossible for both of these definitions to be fully true. If the second definition is true, and repentance does indeed mean turning from sin, then we should reject the first definition as misleading. It needs qualification. But if the first definition is true, then the second is incomplete. It is as if we had looked up the word “turn” in the dictionary and found that it simultaneously means (1) to change direction and (2) to change direction by always going left.

Let’s look at another reputable source. To the right is a screenshot taken from the Blue Letter Bible showing F.F. Bruce’s definition of repentance: “Repentance… involves a turning with contrition from sin to God.” My problem here is with the qualifier contrition. Apparently it is not enough that you turn to God, you must turn with remorse, regret, and feelings of guilt. If you don’t have these feelings then you’ve not really repented and therefore you’re not saved. So go away, ponder your sins, and come back when you’re ready to have a good cry about them.

This is pure emotionalism. This is old covenant sackcloth and ashes. This is Judas killing himself with grief. The good news is supposed to release great joy, not great sorrow. When you’ve heard that God loves you and has forgiven you and carried all your infirmities and has provided everything you need for life and godliness, why would you be sad? It’s truly bizarre.

Religious people read this scripture backwards: “Repentance brings godly sorrow.” Or they say “repentance is godly sorrow.” But Paul says no such thing. In KJVese he says godly sorrow worketh repentance. In other words, godly sorrow and repentance are different things. And if you read the context you will see that Paul was not referring to the repentance that leads salvation but the relational strain between him and his beloved Corinthians. They had given him the cold shoulder, he rebuked them, they felt bad about it and repented.

Godly sorrow can and does lead to repentance but it’s unlikely that you will cry every time you change your mind about the Lord. In truth, it doesn’t really matter how your emotions respond when you learn about the good news of God’s grace. It only matters that you believe it.

Repentance, like football, means different things to different people. But only one code of the game is played in heaven (rugby!). Similarly, there’s only one kind of repentance that matters to God and that’s the kind that leads you to Him. His heart’s desire is for you to come to Him. You can come happy or come sad but the main thing is that you come.