Have you ever walked out of an action movie wishing that someone with a bit of talent would make a movie based on a Bible story? The typical Hollywood blockbuster suffers from weak stories; the Bible is a source of rich stories. You would think it’s a perfect match. So why aren’t there any good movies about the likes of Joshua, Gideon, and David? Well soon there just might be thanks to Cliff Graham whose new-ish book, Day of War, is presently being made into a movie. I have no idea how the movie will turn out, but if it’s even half as good as the book it should a ripper.

I was sent a copy of Day of War two weeks ago by the good people at Beloved Pictures. Prior to that I had not heard of either Cliff Graham or his Lion of War series, of which this book is the first to be published. I have to confess, I was a little skeptical at first. Christian fiction, like Christian movies, is often cringe-inducing. Happily my fears were unfounded. Day of War is a page-turner, a roller-coaster adventure from start to finish.

Day of War is the story of Benaiah the son of Jehoida, “the Three”, and others who featured in the life of David prior to his assumption of the throne. You’ve probably noticed how the Bible hardly gives any attention to these men who did amazing exploits. Benaiah, we’re told, went into a pit on a snowy day and killed a lion (2 Sam 23:20). But that’s about all we’re told. Josheb, chief of the Three, “raised his spear against eight hundred men, whom he killed in one encounter” (2 Sam 23:8). And that’s we get – just one verse! For a male reader this is maddening. Tell us what happened? Did they all charge him at once? How did he do it? The Bible doesn’t say. It has too many good stories to tell and not enough space to tell them. Enter Cliff Graham.

Taking an author’s license Mr. Graham tells the story of Benaiah killing the lion in the pit. (It’s heart-stopping stuff!) He also tells us plenty about Josheb. We learn that he’s physically unimpressive, wears a black tunic that his wife made for him, and that he is the funniest man in David’s army. He is also extraordinarily dangerous. In a memorable scene near the end of the story, the Three are assigned to cut off the escape of fleeing Amalekites. Josheb et al. are out-numbered hundreds to three but of course they pull it off. Mr. Graham’s genius is not in getting us to believe that they did the impossible – we already know how it’s all going to turn out – but in describing how they did it. Mr. Graham, you see, is a soldier. He understands both the skills of combat and the dreadful effects that warfare can have on a man’s soul. And this is why Day of War is not a book to give to your 12 year old son. The violence is dished out in Biblical proportions in a way that faithfully portrays both the glory and the darkness of Israel’s wars. You have been warned.

But if the thought of Amalekites meeting gruesome ends does not trouble you, then you’re in for a treat for Day of War fills the gaps between the verses with historical and military credibility. Mr. Graham is a masterful story-teller who sits you down at the campfire while his characters joke and tell tales and do all the things that men do when they are away from home. He makes the Biblical past come to life in a way few authors can manage. For a first-time novelist, he has hit a home run!

I mentioned historical credibility. I should also add that there are also a few surprises in the book which add a layer of supernatural intrigue. I won’t go into details other than to hint at one gripping scene where David rebukes an enemy soldier of mysterious origin and another where a bleeding and broken Benaiah is fought over two larger-than-life warriors.

Since this is a new covenant blog I should also point out that Day of War is an old covenant story. It’s Urim and Thummin territory. Never sure whether God will be there to help him in the day of battle, David is prompted to examine his heart for hatred and vengeance. This sort of sin-hunting introspection is not how we live but it’s how David lived. And when God does show up in the form of a covering, it’s invariably exciting. Burning with irresistible power David slays giants and runs through troops. 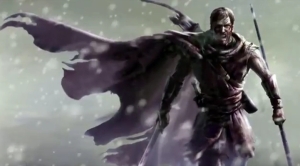 Apparently Mr. Graham wanted to write a massive 1500-page book but the publishers asked for something smaller. Day of War, then, is the first of a five-part series. It’s the bit of the story that revolves around David and his men marching to war with the Philistines, returning home to Ziklag, and then hunting down the Amalekites who kidnapped their women and children. I imagine the remaining books in the series will see David taking the throne at Hebron before heading to Jerusalem, uniting the 12 tribes, and pacifying the enemies of Israel. Even though I already know what’s going to happen, I can’t wait to hear Mr. Graham tell the story.
___
See all E2R’s book reviews here

9 Comments on “Day of War” by Cliff Graham