I know, it’s a dumb question. And yet among Christians this question – Is Jesus the Savior of the world? – leads to two radically different answers:

Between these two answers lies one of biggest debates raging on Gracebook, sorry Facebook, today. It’s a debate between those who believe in ultimate reconciliation, historical reconciliation, and, er, regular reconciliation. (I’m not good with labels.)

I normally steer clear of Facebook debates – my heart is simply to preach Jesus and Him crucified – but since many grace folk have been drawn in I thought it might help to frame the issues so people can see what they are getting into. In a series of short posts, I want to look at some of the scriptures used to support these and similar claims (e.g., all are righteous, all are in union with Christ). If you’re not interested, no problem. Normal service will resume soon. But if you are interested and want to ask “What about this scripture and that scripture?” then check out my detailed study notes. I don’t normally publish my notes, but several people have been asking for my views so there they are.

Why preach “the whole world is saved”?

Those who say the whole world is already saved mainly stake their claim on the fact that Jesus was called the “Savior of the world.” That was His title and job description. Since Jesus would not have returned to heaven leaving the job half-done, the whole world must have been saved 2000 years ago.

The connection between the title – “Savior of the world” – and the conclusion – “all are now saved” – is logical but flawed. When did Jesus save the world? It could only have happened on the cross. Yet Jesus was known as the Savior of the world long before He died. When He was born He was heralded as good news for all people – not just Jewish people (Lk 2:10); when He was presented in the temple Simeon recognized that He was holding the salvation of all people (Lk 2:30-31); and to a group of stunned Samaritans at a well He was revealed as “the Savior of the world” (Joh 4:42).

Before Jesus had saved anyone, He was known as the Savior of the world. In other words, Jesus was not just the Jewish Messiah, He was also the Gentile Messiah and your Messiah, just as Isaiah had prophesied:

It is too small a thing for you to be my servant to restore the tribes of Jacob and bring back those of Israel I have kept. I will also make you a light for the Gentiles, that you may bring my salvation to the ends of the earth. (Isa 49:6) 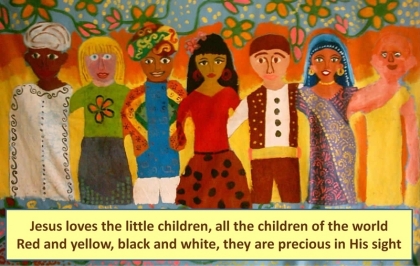 Good news of great joy for all people

If you’re non-Jewish that’s a cause for celebration right there! Thank God that He considered it too small a thing to save only Israel. Thank God that He sent His only begotten Son because He so loved the whole world. We take this for granted now but 2000 years ago this was big news. Paul, Peter, and John were all struck by it. Here’s John writing about it in his first epistle:

And we have seen and testify that the Father has sent his Son to be the Savior of the world. (1 Joh 4:14)

And what does it mean to be Savior of the world? This is how John explains it:

He is the atoning sacrifice for our sins, and not only for ours but also for the sins of the whole world. (1 Joh 2:2)

According to the Bible, “Savior of the world” does not necessarily mean “all are saved.” It means Jesus is the atoning sacrifice for the sins of the whole world. Of all those who physically laid eyes on Jesus, John the Baptist was the first to recognize this:

The next day John saw Jesus coming toward him and said, “Look, the Lamb of God, who takes away the sin of the world!” (Joh 1:29)

Again, this was big news. Jesus hadn’t come to die solely for the Jews but for everyone. For Paul this revelation was a mystery revealed: “Through the gospel the Gentiles are heirs together with Israel” (Eph 3:6). Does this mean that all are saved? Paul never says this. Instead he said that grace only comes through faith. Since not all have faith, not all are saved. This was Peter’s understanding as well:

Salvation is found in no one else, for there is no other name under heaven given to men by which we must be saved. (Act 4:12)

Jesus is the Savior of the world, as Peter declared to the Sanhedrin, but we still must be saved.

“Jesus came to save the entire world. Did He fail?”

Not at all. Jesus has provided for the salvation of the entire world. There is nothing more He can do. Since the Greek word for save (sozo) includes healing, one might just as easily ask, “Jesus came to heal the entire world – did He fail?” The answer to the second question is the same as the answer to the first. Jesus has provided for the complete healing of every sick person, but not everyone is healed. Similarly, the Lamb of God who took away the sin of the world has provided for the salvation of every sinner, but not everyone is saved. Hence Peter’s exhortation, we must be saved.

Is it a bad idea to tell a sinner that they are saved?

You may say, “Isn’t this all just semantics? Does it really matter if we tell sinners they’re saved or unsaved? Isn’t the main thing that they turn to Jesus and realize what He provided for them 2000 years ago?” I think it does matter because when you tell an unsaved person that they are already saved, you’re sending a very different message from the one they will hear from Jesus:

Those who preach historical reconciliation, a.k.a. inclusionism, read these verses and say “I agree – we must believe to experience eternal life.” But they will disagree with what Jesus says in verse 18. “The unbeliever is not condemned already but saved already.” Since you can’t be condemned and saved at the same time, you’re going to have to choose who you would listen to. My money’s on Jesus. If He’s right then unbelievers are definitely not saved; they are condemned. Certainly Jesus is not the one condemning them; they condemn themselves by spurning God’s grace. But in rejecting the Savior of the world they are rejecting the only name under heaven given to men by which we must be saved.

As we will see in the coming weeks, the gospel is really good news for lost people. But if the lost don’t think they’re lost, perhaps because some well-meaning believer told them that they are already saved, then the finished work of the cross isn’t going to seem quite so appealing. If you think you’re not drowning you won’t see your need for a rescuer.

Jesus and all the apostles exhorted sinners to put their faith in God and be saved. Those who refused to come to Jesus to receive life were considered condemned, wretched, and foolish. These are harsh words but some people need to hear the bad news before they will appreciate the good news. And what is the good news? That Jesus died for every condemned and wretched fool! Everyone who believes in Jesus – whether Jew or Gentile, foolish or wise – may have eternal life, for Jesus truly is the Savior of the world.

72 Comments on Is Jesus the savior of the world?