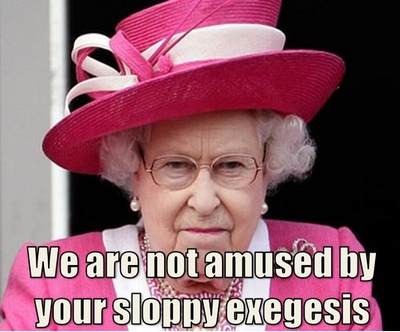 “Why do you assume the first chapter of first John is addressed to unbelievers?”

This question was put to me by a friend after reading my recent article on 1 John 1:9.

Judging by some of the comments that have come up in various discussion threads, it’s a question many of you are asking:

–    How can you say that an epistle clearly written for churches was meant for the unchurched?
–    Aren’t you treading on thin ice when you carve up the Bible saying, “That bit’s not for me”?
–    Aren’t we supposed to heed the whole counsel of God?

These are excellent questions and I will try to shed some light by looking at 1 John 1. But let me state up front that I do not assume 1 John 1 was written for unbelievers – assumptions of that sort are dangerous. Rather I conclude it based on the evidence, which I will present below.

But first, let me challenge two traditional arguments used to suggest that 1 John 1, and particularly verse 9, is meant for Christians.

Bad assumption #1: The New Testament church letters are for saints not sinners

Actually the letters for the churches were for churches, meaning assemblies of people. They were corporate letters. As such, they addressed issues for a variety of people, including saints and sinners.

This shouldn’t surprise you, but going to church doesn’t make you a Christian. In the New Testament churches there were plenty of people who were did not know Jesus. Think of the “false brothers who infiltrated our ranks” (Gal 2:4) and the false teachers, false apostles, and false prophets who seemed to follow Peter and Paul everywhere they went.

We have this rose-tinted view of the early church as a place of harmony and accord. In reality those churches were fractious battlegrounds between Christians, Pharisees, Judaizers, and outright crooks. Read the middle chapter of Peter’s second letter and you will find repeated warnings directed to false teachers. Where are these heretics? They are not out in the world; they are in here “among the people” (2 Pet 2:1).

How about the antichrist? I bet you can’t guess where he lives. Well there’s more than one and you may be surprised to learn that these antichrists aren’t found in Rome or Washington DC but are among the church. “They went out from us, but they did not really belong to us” (1 John 2:18-19).

The wonderful thing about church groups is that they are open. Everyone is welcome. But not everyone who comes is a believer. Every preacher knows this and tailors their message accordingly. They’ll have something for the saint and something for the sinner. The epistle writers are no different.

John says “we” 20 times in chapter 1, but is he referring to “We-believers” or “We-people” or “We-his-royal-self”? It is a mistake to assume that “we” always refers to a particular set of people in every single instance. We need to consider the context. This is how I read it: 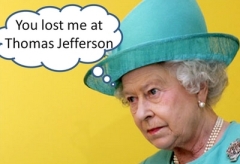 It seems clear that for the first part of the chapter John is doing a fair impersonation of Prince Charles by referring to himself in the majestic plural. Don’t laugh: this habit actually originated with the kings and princes of the Old Testament. (See 2 Samuel 16:20 for an example.) But halfway through John switches to Thomas Jefferson adopting a “we-the-people” voice.

This begs the question, Who are the people? Who is John referring to?

Why do I think 1 John 1 is addressed to unbelievers?

To answer this question we need to look at the “you” that John singles out in verse 3. Who are “the you”? What are they like?

In the following verses John gives us a comprehensive description. Let us consider how this group compares with the typical Christian. See if you can spot the difference…

As you can see, the group on the left is unlike the group on the right. Indeed, the people in this group are the exact opposite of what the Bible describes as a Christian. Hmm. I guess that means that they – those John is addressing in chapter 1 – are not Christians. They are not the “dear children” John begins to address in chapter 2.

Was that so hard?

Here’s the punch-line: If you think the whole Bible was written for you, you’re going to end up confused, messed up, and in serious trouble.

If you still think 1 John 1:9 is addressed to believers, that’s fine. You could be right. The real question here is not Who? but What? This is why I say it is essential, when reading this scripture, that we ask the right question.
_____

Get grace by email. It’s free!

Escape to Reality is entirely reader-funded. Want to help others grow in grace? Support E2R on Patreon (USD) or Donorbox (other currencies) today.

103 Comments on Is 1 John 1 for believers or unbelievers?