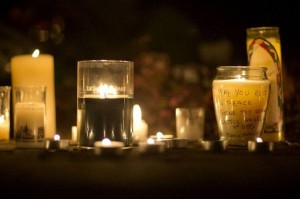 Yet another school shooting has resulted in the loss of innocent lives in America and now questions are being asked: Where was God? Why didn’t God stop this? Why didn’t God protect the lives of those 20 children?

For a grieving parent, these are normal questions. When you have suffered the greatest loss any human can suffer it is perfectly understandable to scream, Why??? Death is awful. It is an enemy. I hate it and God hates it.

I hesitate to write this because many are using this latest tragedy as an opportunity to grandstand and advance their particular causes. We need fewer guns. We need more prayer. We need to turn back to God and stop abortions.

Causes have their place but in a week when families are burying their children, this is not the time. But the questions aren’t going away.  Loud men with agendas are shouting at us. God is judging America! We need to repent! We need to legislate the kingdom of God into existence!

So how should we respond to these loud men?

Well I usually respond to foolishness by ignoring it. But this morning someone “new to grace teaching” wrote to me and asked for my opinion. So here it is:

Anyone who tells you otherwise is unacquainted with the gospel. The sins of America, along with the sins of every other nation, were judged at the cross. If Christ’s death was a sufficient sacrifice for our sins – and it was (see Heb. 10:12) – then God cannot judge America for her sins. It would be unjust for God to judge the same sin twice.

(What of Judgment Day? That’s when we’ll reap the eternal consequences of our choice to trust or reject Christ and his perfect sacrifice.)

When an earthquake flattened my hometown last year, some said God was judging Christchurch for its sins. Well by that logic God should have wiped America off the face of the map because the sins of a city are few in comparison to the sins of a superpower. I’ll say now what I said then: The cross – not earthquakes (or massacres) – is God’s remedy for sin.

The sins of America were forgiven or done away with long before the Mayflower Pilgrims landed at Plymouth Rock (see Heb 9:26). Sin certainly has destructive consequences, as we have just seen in Connecticut, but divine judgment is not one of them (see Is. 54:9-10). Jesus is the Prince of Peace.

The highest heavens belong to the Lord, but the earth he has given to man. (Psa 115:16)

God gave us this planet and we are responsible for much of what happens. Who first sinned and opened the door to death? It wasn’t God and it wasn’t Satan. It was one of us (Rom 5:12).

Some are now saying that we let Satan into our schools when we took the prayer out. Actually, Satan’s been messing with us a lot longer than that. His evil influence goes all the way back to the Garden. But Satan could not have influenced us if we had not listened to his lies.

The blame game isn’t helpful, but if you must point the finger, blame Adam, whose decision to reject God brought death to us all, or blame his offspring, who built a civilization on violence (Gen 6:13).

3. What did we do to deserve this?

When bad things happen we tend to wonder, What did I do to deserve this? Understand that this is the flesh talking. It’s Job sitting in the ashes examining his navel for unconfessed sin. I’m pretty sure I’ve been good, yet I’ve lost everything so maybe I wasn’t. But I’m sure I was. I don’t know what to think!

The flesh is a score-keeper. When good things happen, it’s because we’ve been good. So when bad things happen, we must’ve been bad. Some call it karma but like all manmade religion it is fruit from the tree of knowledge of good and evil.

Two-thousand years ago a tower collapsed killing eighteen people. This tragedy led Jesus to pose a question to the religious-minded folk of his day, “Do you think those who died were more guilty than all the others living in Jerusalem? I tell you, no!” (Luk 13:4-5).

Sometimes people die because they are in the wrong place at the wrong time. Had those 20 children done anything deserving of death? Of course not. There is no lesson here. No moral. No “avoid this next time.” All we can take from this, said Jesus, is that death comes to us all. So repent, and come to him for new life!

4.  Why didn’t God stop this from happening?

He couldn’t – not without violating us.

I know this will come as something of a shock, but God doesn’t always get what he wants. He is not willing that any perish, yet people perish. God could intervene but he restrains himself on account of love.

Free will is a powerful thing! With it we can choose life or death and Almighty God won’t stop us. In giving us the freedom to choose knowing that he would have to come and die to remedy our choices, God was saying that he would rather die than live without us.

At funerals this week mourners may hear that God gives and takes away but it’s just not true. God gives without ever changing his mind (Rom 11:29).

5. Has God left the building?

The question, “Where was God?” implies that God is not here. He skipped town when we stopped prayer in schools or when the Supreme Court decided Roe vs. Wade. “We’re sinners and God doesn’t want anything to do with us.” Such thinking usually leads to a long list of things we must do to fix the problem.

God didn’t reject Adam; Adam rejected God. Even after Adam and Eve were evicted from the Garden God went with them – he didn’t abandon them. We know this because their kids were familiar with God’s voice.

The story of our species is one of unrequited love. God made us for love but we spurned him. Since then he has waited for the prodigal to come to his senses and return home.

6. How should we respond?

With love and grace.

This tragedy in Connecticut did not happen because God stopped loving us or caring for us. Neither did it happen because our religious performance is not what it could be. It happened because a certain individual made an awful choice.

What should we do in response? This week we should weep with those who weep and mourn with those who mourn. We should ache and hurt and cry because the world is a place where children die from bullets and poverty. We should pray for the families of Charlotte Bacon, Daniel Barden, Rachel D’Avino, Olivia Engel, Josephine Gay, Dylan Hockley, Dawn Lafferty Hochsprung, Madeleine Hsu, Catherine Hubbard, Chase Kowalski, Nancy Lanza, Jesse Lewis, Ana Marquez-Greene, James Mattioli, Grace McDonnell, Anne Marie Murphy, Emilie Parker, Jack Pinto, Noah Pozner, Caroline Previdi, Jessica Rekos, Avielle Richman, Lauren Rousseau, Mary Sherlach, Victoria Soto, Benjamin Wheeler, and Allison Wyatt. Pray that in this dark night they might somehow know the comfort of God.

And when the time of mourning has passed we should get up and carry on with the one and only task Jesus has given us – that of proclaiming the good news of his kingdom. We should provide a broken world with a prophetic picture of the age to come – the age where justice reigns and heaven and earth are one. Darkness only persists because the light does not shine, so shine.

The answer to violence is not to stick the Ten Commandments back in the courthouses or build higher walls. For the children of God, these are inferior choices. What this sick and dying world needs most is a revelation of God with us.

God is not opposed to us. He loves us warts and all. While we were sinners he died for us and he now lives for us. What America and every other nation needs is a revelation of God’s limitless love. They need to see Jesus.

If you enjoy Escape to Reality, sign up to our email list and we’ll notify you about new articles as soon they come out. No spam, we promise.

And if you’d like to see these messages of love and hope go further, support us via our Patreon page.

33 Comments on Where was God in the Connecticut School Shooting?