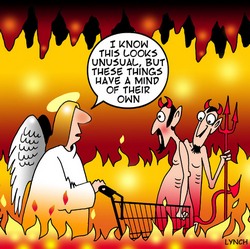 A few people have asked for my views on hell. I have never written on hell before. Like the weather on Uranus, hell is not a subject I think much about. I’m unlikely to come up to you at a party and say, “Hey, what about hell?”

Hell is just not on my radar.

But I appreciate that hell has become something of a “hot” topic lately, another shibboleth if you like. On one side are those who say, “Hell is hell and you’re just have to accept it.” On the other side are those who find it inconceivable that a good God could cook his kids in an eternal roasting pan.

So what is hell? Is hell real? And how does hell fit into the gospel of grace?

To glean some answers I didn’t go to the internet (shock!). Neither did I fish around on Facebook (double-shock!). Instead, I read every scripture on the subject that I could find. This means you can check everything below in your Bible. Don’t take my word for it – see for yourself.

I should warn you upfront that the Bible doesn’t provide all of the answers to your questions about hell. But it surely provides some.

Here’s the first thing you need to know about hell:

1. The meaning of the English word “hell” has changed over the past few hundred years

Read the King James Bible and you may be confused by scriptures like these:

How can hell be thrown into hell? That doesn’t make sense. Well it does if you appreciate that the word hell in middle English meant “to hide or conceal.” Today, the word hell means something different:

KJV “hell” = sheol/hades, the abode of the dead
Modern “hell” = the lake of fire, the fiery furnace, “the eternal fire,” etc.

In Biblical times, no one thought the dead went to hell. They went down to sheol (Hebrew) or hades (Greek), which are two names for the same nether region. A more accurate translation of the verse above is: “Then death and hades were thrown into the lake of fire.” One day there will be no more death and no more grave. That’s good news.

So before we proceed, it will help to clarify what I mean by the word “hell.” I’m going to go part company with ye old KJV and go with the modern meaning. Based on my reading of scripture hell is the place of eternal or final condemnation which…

Whether hell is a literal furnace or lake, I can’t say. But the one adjective that most often appears with hell in the Bible is fire. In the New Testament alone the link between hell and fire appears in dozens of verses. Will the fire of hell prove to be real or a metaphor for something else? I don’t know. I don’t want to find out.

2. Hell is not sheol/hades

This point is worth repeating since many commentators think that sheol/hades consists of two compartments – smoking and non-smoking. You may have heard that the good guys go to “Abraham’s bosom” while the bad guys go to the other side. Nah. That’s a bad interpretation that suggests that Judgment Day has taken place already. Yet Jesus said the eternal fire or lake of fire or whatever-hell-is appears at the end of the age when he returns (Matt 25:41). Has Jesus returned? No. Then nobody is yet in hell.

The two-compartment view of hell is based on an over-literal interpretation of the parable of the rich man and Lazarus (Luke 16). It’s a mistake to treat a prophetic parable as a Wikipedia entry for hell, especially when sheol/hades is described nowhere else as a place of fiery torment.

3. Hell is not the devil’s home – it’s his prison or execution chamber

All those cartoons depicting demons running their business from hell give the false impression that they are happy to be there. They are not there yet (Rev 20:10) and they live in terror of the place (Matt 8:29).

4. The Jews had little understanding of hell

Why did Jesus talk about fiery-hell so much? Before Jesus, Jewish people weren’t mindful of hell. What terrified them was death and sheol, the place of the dead (see Ps 18:5-6, Hos 13:14). Just as the modern mind is hell-focused, the Jewish mind was sheol-focused. Read the words of Job and you get the impression that some of these guys even had a romanticized view of sheol (eg: Job 17:13).

Jesus puts things in perspective. “There are worse things than physical death – let me tell you about hell” (see Matt 10:28).

5. Jesus’ descriptions of hell cannot be dismissed as prophecies of Jerusalem’s fall in AD70

Rather, the destruction of Jerusalem by the Romans can be interpreted, if you like, as a picture of ultimate and final judgment by God. I’ll talk more about this in a later post. For now, understand that the “Days of Vengeance” (past) ought not to be confused with the coming “Day of Wrath” (future).

6. Hell is the punch-line to the bad news of the law

Hell is the cure for a watered-down law. Hell makes the law scary. The condemning ministry of the law reaches its ultimate expression in the eternal condemnation of hell. 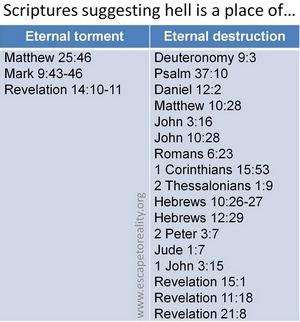 7. The lake of fire is the second death

What is the lake of fire? There are three interpretations: (1) it is a literal place of eternal, never-ending torment, (2) it is symbolic of the second death, meaning final destruction, (3) it’s a place of purification and rehabilitation.

I find the third interpretation at odds with the Biblical description of the lake of fire as a place of hurt (Rev 2:11) and weeping and gnashing of teeth (Matt 13:42,50). The Bible says nothing good about hell. (More on this in my next post.)

In my view, the Bible is being most clear when it describes the lake of fire as the second death (Rev 20:14). First death is physical death; only the body dies. But second death is the destruction of both body and soul (Matt 10:28).

I may be wrong about this, but I lean towards the view that second death is not eternal suffering but eternal destruction – meaning, those in it are destroyed or “diminished” in some way and that’s it forever. I appreciate there are scriptures that go either way on this point (click on the Table above if you’re interested), but when Hebrews 10 describes the raging fire of judgment “that will consume the enemies of God,” to me that suggests those who experience it are consumed, not tortured. God’s wrath is finite. You may disagree with me on this, and that’s fine. But I hope you agree that whatever hell is, it’s a place to avoid. Happily…

Nobody need go there and it is God’s will that nobody does! How do I know? I’ve seen the cross. I’ve seen the great lengths he has gone to make hell unnecessary. Hell is not for people but the devil and his angels (Matt 25:41). Those who choose to follow the devil are breaking their Father’s heart.

Like death in the Garden, hell is not what God wants. It’s something we choose against his most strenuous desires.

9. Hell should not be used as a tool in evangelism

As I mentioned, Jesus preached hell in connection with the law. And those who prefer the bad news of the law to the good news of grace certainly need to hear about hell for it is the baddest news of all.

But to place hell at the center of the gospel is to mischaracterize God as a vengeful punisher who sends people to hell when in truth he is a loving Father who saves us from the hell of our own choices.

God didn’t create us to save us from hell. He made us so that we could share his life and enjoy him and each other. The purpose of life is not “escape hell.” Eternal life is knowing and experiencing God’s love now and for all eternity.

Threatening people with hell is no way to invite them into a relationship with their Father who loves them and yearns for them. When we make hell part of our message, we appeal to people’s worst fears and insecurities. Instead of returning to God like the Prodigal Son they will draw back in fear like the Israelites at Mt. Sinai. Jesus wants no shot-gun weddings.

10. The condemnation of hell has no place in the gospel of grace

Jesus’ gospel was not, “Turn or burn,” but “God’s kingdom is at hand and you can participate in it.” He was not interested in scaring the hell out of people but inviting all to enter the kingdom of heaven.

We haven’t been commissioned to preach the bad news of hell but the good news of the kingdom. As someone once said, “God never delights in people getting what they deserve. He is about saving us from what we deserve.” That’s grace. That’s the good news. And that’s the message the world most needs to hear. 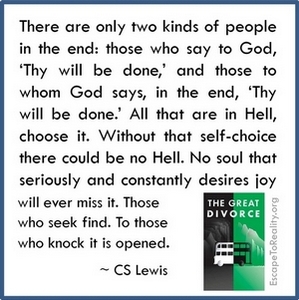 164 Comments on What about Hell? 10 things to know