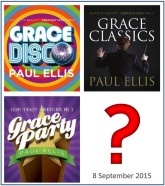 This competition has now closed and the winners have been notified. Thanks to everyone who entered.

In two months my new book Grace Remix will be released. This is the fourth and final instalment in my Greatest Hits series and it’s the best one so far. Well, it’s definitely in the top four.

I’ve got TEN signed copies of Grace Remix to give away now!

I want to give these books to people who’ve read at least one of the other Greatest Hits books. So if you enjoyed Grace Disco, Grace Classics, or Grace Party, you could be among the first in the world to get your hands on the new book.

You’ll get a real book too, made of paper and ink. And it doesn’t matter where you live. I’ll send these books anywhere in the world, from Timbuktoo to Tallahassee.

I want to give you a book but I need proof that you’ve read at least one of the other Greatest Hits. So to enter the draw:

At the end of the week I’ll pick ten winners. (Since grace is fun I’m looking for smiles, wacky grins, funny faces – see below for inspiration.) If you’re picked, you’ll get a book. Easy!

The autographed books are going in the mail at the end of the week, so what are you waiting for? Grab your camera/phone, take a pic, and you could be among the first in the world to get a hold of Grace Remix: Escape to Reality Greatest Hits, Vol 4.

Everyone else has to wait until September.