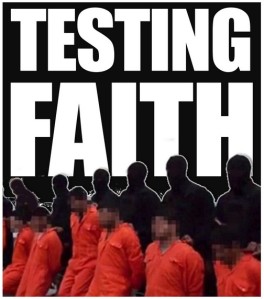 What goes through your mind when you see men in orange jumpsuits waiting to be killed for their faith in Jesus? Do you think, “I could die for Jesus,” or “Thank God that’s not me”?

The earliest Christians faced the lions of the Roman circus and persecution remains a fact of life many Christians today. But most of us are’t being threatened with torture and martyrdom. No one’s holding a knife to our throats and saying, “Renounce Jesus or die.”

But what if they were?

Could you go through with it? I honestly don’t know the answer to that question since I’ve never been in that situation. But I used to believe that if I couldn’t go through with it, meaning under pressure of torture I denied Jesus, then Jesus would deny me before God. I came to that conclusion after reading scriptures like these:

Do not be afraid of what you are about to suffer. I tell you, the devil will put some of you in prison to test you, and you will suffer persecution for ten days. Be faithful, even to the point of death, and I will give you the crown of life. (Rev 2:10)

If you wanted to make Christianity hard so that only the toughest apply and the weak stay away, this is the verse you’d quote. You’d preach something like: “Getting into the kingdom requires the right stuff. Only the strongest can make it. You need to harden up and die for Jesus as the early Christians did.”

But this is a grace-killing message that will lead you to trust in yourself. The fact is, it is not normal to face the lions of life – cancer, dementia, HIV/AIDs, etc. – with poise and equanimity. We were born to live, not die. Anytime you see someone facing death with supernatural peace, that is a sign that should make you wonder.

Jesus’ words to the church at Smyrna should not be interpreted as a threat, as in: “Fail the test and I’ll kick you out of the kingdom.” Christianity isn’t a test, it’s a rest. Jesus is saying something like this:

Some of you are going to be persecuted on my account and some of you will even die. Don’t be afraid but fix your eyes on me. I’ve been through it all and I have overcome the world. Trust me. We’ll go through this trial together, and you’ll be amazed at how well your God-given faith bears up under pressure. This test will only be for a short time and then we will meet face to face. I can’t wait to see you and hug you and give you your crown. (GITQ, p.188)

The testing of your faith

Consider it pure joy, my brothers, whenever you face trials of many kinds, because you know that the testing of your faith develops perseverance. Perseverance must finish its work so that you may be mature and complete, not lacking anything. (James 1:2-4)

The NIV refers to the “testing” of your faith, which is a verb, but the word James uses is a noun that means “trustworthy.” The trials of life are not to see whether we can manufacture the right stuff, for faith is a gift from God and not something to manufacture at all. The trials we face reveal the quality of God’s good gifts. They show us that the faith he has given us is trustworthy. It’s a good gift!

In the natural you may not be able to endure, but your faith will endure because your faith comes from God – and when you see that you will endure. In other words, James is giving us a promise, not a threat. I love how the Good News Bible translates his words:

For you know that when your faith succeeds in facing such trials, the result is the ability to endure. (Jas 1:3, GNB)

All well and good, but how do we put this into practice? What if you are going through tough times? What’s the takeaway?

We can learn about endurance from Paul and his companions who were tested “far beyond our ability to endure, so that we despaired even of life. Indeed, in our hearts we felt the sentence of death” (2 Cor 1:8-9). We’re not talking about the small stuff here. Paul’s not saying, “I couldn’t find a park at the mall.” He’s talking about the Big-Stuff-that-can-kill-you. He’s referring to the trials of life that are greater than our ability to endure. Sometimes we find ourselves under the sentence of death. When the lions roar, what can you do?

The light in the darkness

For God, who said, “Let light shine out of darkness,” made his light shine in our hearts to give us the light of the knowledge of the glory of God in the face of Christ. (2 Cor 4:6)

Life is dark but God has given you a Light who is greater than the darkness. Jesus has overcome the world, conquered death, and there is no trial that unsettles him. Jesus smiles at every storm! Walking in the light of the knowledge of Jesus means fixing your eyes on him during your trial.

But we have this treasure in jars of clay to show that this all-surpassing power is from God and not from us. (2 Cor 4:7)

It’s not about you; it’s about Jesus who is with you. When the doctor tells you about the sorry condition of your jar, you need to hear about the Treasure. The Treasure is awesome, but you might not appreciate that until you go through hard times.

The trials of life aren’t from the Lord – he wasn’t responsible for the Roman lions or the persecution of the saints in Smyrna – but he uses these opportunities to reveal himself to you in new and exciting ways.

In this you greatly rejoice, though now for a little while, if need be, you have been grieved by various trials, that the genuineness of your faith, being much more precious than gold that perishes, though it is tested by fire, may be found to praise, honor, and glory at the revelation of Jesus Christ… (1 Pet 1:6-7, NKJV)

We don’t go through trials to see if we can manufacture the right stuff. Rather, life’s trials reveal that God has given us the Right Stuff because he has given us himself. It is his faith that endures and his light that shines!

Fix your eyes on Jesus and you will endure too.

44 Comments on The testing of your faith