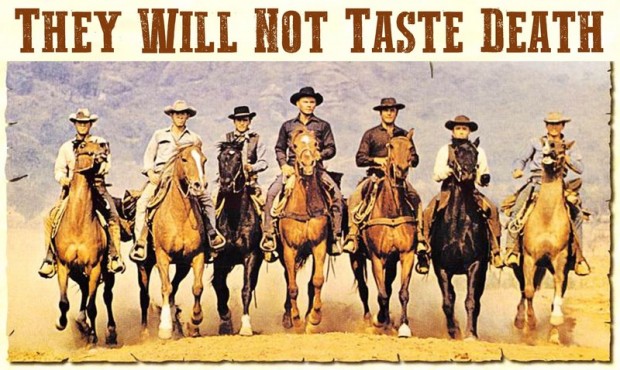 Jesus said some of his disciples would live forever and wander the earth as ageless immortals. No, wait. Did he really?

It sounds like the plot of an Indiana Jones movie but the truth is no less exciting. Here is what Jesus actually said:

Truly I say to you, there are some of those who are standing here who will not taste death until they see…

Each version is different but the same. Since the kingdom is nothing without the king, these verses are all about Jesus.

But what’s this business about Jesus coming into his kingdom? When did that happen, and why did only some of the disciples see it?

The short answer is Jesus is talking about his exaltation. Jesus came to earth as a servant, but he returned to heaven as a king. In other words, Jesus is speaking of his resurrection and ascension…

when (God) raised him from the dead and seated him at his right hand in the heavenly places, far above all rule and authority and power and dominion, and every name that is named, not only in this age but also in the one to come. (Ephesians 1:20-21)

Eyewitnesses of his majesty

One of the disciples who saw Jesus transfigured was Peter.

We were eyewitnesses of his majesty. For when he received honor and glory from God the Father, such an utterance as this was made to him by the majestic glory, “This is my beloved Son with whom I am well-pleased” – and we ourselves heard this utterance made from heaven when we were with him on the holy mountain. (2 Peter 1:16-17)

Put yourself in Peter’s shoes. You have seen Jesus heal the sick and cast out demons, but the prophets healed the sick too. Perhaps Jesus was just another prophet. Then Peter heard the voice of God, and he saw Jesus shine brighter than the sun. Nope, Jesus is no mere prophet. Peter just became an eyewitness to majesty.

Perhaps Peter wanted to tell others what he saw. “Jesus is the King!” But Jesus told him to say nothing until after the resurrection (Mark 9:9).

Peter was like one of those journalists who get to see movies before their official release. He’s got a big secret, a spoiler. He knows Jesus is the King. But he can’t talk about it until after the premiere.

Ever notice how Jesus spoke differently after he was resurrected? He said stuff like this:

All authority in heaven and on earth has been given to me. (Matthew 28:18)

Later Peter and the disciples followed Jesus up another hill where there was another cloud. It was déjà vu all over again, except this time Jesus didn’t come back down with them but ascended to heaven. Seeing Jesus rise up into the clouds was a sight the disciples never forgot.

The disciples saw the Son of Man leave, but Daniel saw him arrive:

In my vision at night I looked, and there before me was one like a son of man, coming with the clouds of heaven. He approached the Ancient of Days and was led into his presence. He was given authority, glory and sovereign power; all nations and peoples of every language worshiped him. His dominion is an everlasting dominion that will not pass away, and his kingdom is one that will never be destroyed. (Daniel 7:13-14, NIV)

The coming of Jesus to the Ancient of Days is one of the five great comings of the Lord. It’s also the coming many Christians don’t know about. Or if they do, they think of it as a going (Jesus went) instead of a coming (Jesus came). But every going implies a coming and this was Christ’s most glorious coming to date.

They will not taste death

Truly I say to you, there are some of those who are standing here who will not taste death until they see the Son of Man coming in his kingdom. (Matthew 16:28)

Jesus promised the disciples they would see it and they did. But only some of them, not all of them, for by the time of the ascension Judas had died.

On the Mount of Transfiguration three disciples got a glimpse of Christ’s kingly glory, then on the Mount of Olives the others saw the Son of Man ascending, and coming into his kingdom.

And those who saw it became eyewitnesses of his majesty.

Adapted from Paul Ellis’s new book AD70 and the End of the World.

Like this article? Become an email subscriber (it’s free) and we’ll keep you posted.

27 Comments on They will not taste death