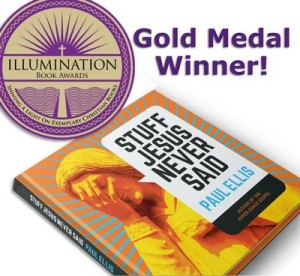 Here’s another announcement: The ebook version of Stuff Jesus Never Said is coming out in a couple of months.

And if you act fast, your name could be in it!

When Stuff Jesus Never Said was published, I said I would not release it in ebook form. But some of you said “I want it on Kindle.” So I changed my mind. You convinced me. We’ll put it on Kindle, and PDF too.

Although I wanted a book that looks and feels good – and the full-color hardback book is stunning – some felt the hardback was a little pricey. The ebook will be cheaper, which is a good thing, because this is a book that needs to be read.

Stuff Jesus Never Said draws a line between truth and tradition, life and death. It strips away the garbage – the stuff Jesus never said – to reveal the good stuff Jesus did say on subjects ranging from divorce and guilt to depression and giving. This is a book that celebrates the goodness of a good God who loves you like a father and wants you to live well.

Who is it for?

But how can we get this book to those who need it? I’ve got a wild idea and it starts with you putting your name in it.

How do I get my name in the book?

When you contribute to a church, you get your name on a pew. Beethoven’s patrons got their names printed in the libretto when the 5th symphony debuted. A publisher puts their logo on the back of the book. But I don’t have a traditional publisher. My writing is supported by patrons, so I’m putting their names in the book.

Anyone can be a patron. A patron is someone who says, “Yes, I want to help spread this message of hope and grace. I want others to know how much God loves them.”

For as little as a dollar a month, you can become a bona fide patron of the arts and a partner in the gospel. And if you contribute a little more, you’ll get a bunch of exclusive patron-only rewards (e.g., draft chapters, advance review copies, Q&A sessions, bonus materials, signed books, etc.). 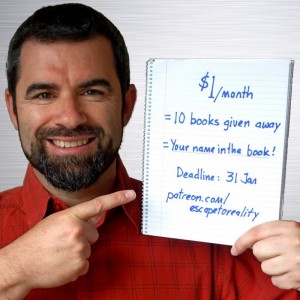 I’m passionate about the good news of God’s grace, and I want as many people to hear it as possible. So here’s the deal: For every new Patron that signs up by January 31, I will give away ten copies of Stuff Jesus Never Said. That’s right – ten copies!

The gospel is free but good books cost money. For an investment of as little as a dollar a month, you will be supporting one of our biggest ever giveaways.

I expect these picture books will go far and wide. They will be gospel seeds bearing fruit all over the world. Exciting, huh!

But be quick. This offer is good for only a few days.

20 Comments on Get Your Name in Paul’s Book