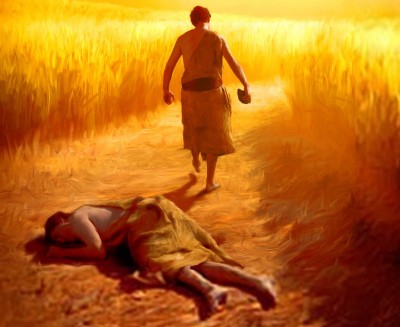 When Abel was murdered, his blood cried out to God for vengeance. Yet God did not kill Cain the murderer but protected him against those who would seek his life.

Clearly, God’s idea of vengeance was different from Abel’s.

The scriptures contrast human and divine vengeance. One seeks payback and retribution, the other pursues peace and restoration. One is vindictive, the other is vindicating. One punishes wrong, the other makes right. One is about revenge, the other is about righteousness.

Human vengeance is codified in the old law of an eye for an eye and a tooth for a tooth. Divine vengeance, in contrast, is revealed in the grace that forgives, restores, and makes new. The former is based on your badness; the latter is based on God’s goodness.

In Isaiah 29, the prophet paints a bleak picture of human vengeance, but in Isaiah 61, he describes divine vengeance. See if you can spot the difference:

The first prophecy points to human vengeance, such as the Romans killing Jews; the second points to Jesus dying for the Jews. Roman vengeance involved brutal and violent retribution, but divine vengeance is nothing like that.

We get an idea from studying Isaiah’s prophecy:

…the day of vengeance of our God, to comfort all who mourn, and provide for those who grieve in Zion – to bestow on them a crown of beauty instead of ashes, the oil of joy instead of mourning, and a garment of praise instead of a spirit of despair. They will be called oaks of righteousness, a planting of the Lord for the display of his splendor. They will rebuild the ancient ruins and restore the places long devastated; they will renew the ruined cities that have been devastated for generations. (Isaiah 61:2-4)

You have come… to Jesus, the mediator of a new covenant, and to the sprinkled blood, which speaks better than the blood of Abel. (Hebrews 12:22,24)

Abel’s blood cried out “Vengeance! Vengeance!” and the result was a curse, but Jesus’ blood cries out “Forgiveness! Forgiveness!” and those who hear it are blessed.

Jesus was a walking-talking testimony of divine vengeance. His heart was to restore rather than punish and to rebuild rather than demolish. This divine desire to make things right rather than punish wrong things can be seen in the way Jesus related to the temple that condemned him and the city that killed him.

Extracted from chapter 26 of Paul’s new book AD70 and the End of the World.

62 Comments on Human versus Divine Vengeance