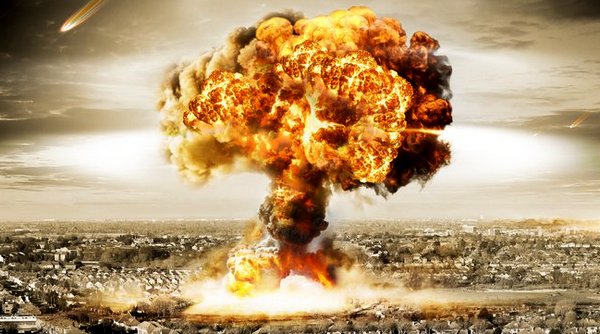 (The Jews) killed the Lord Jesus and the prophets and also drove us out. They displease God and are hostile to everyone… they always heap up their sins to the limit. The wrath of God has come upon them at last. (1 Thessalonians 2:15-16, NIV)

This sounds like something you might read in the Old Testament yet it’s found in the New. It’s out of place. And it’s almost certainly a reference to the siege of Jerusalem. “Those troublesome Jews are sowing the wind and are about to reap the whirlwind,” says Paul. “The wrath of God has come on them at last!”

Instead, he says, “The wrath has come.” Not the wrath of God, just the wrath.

Certainly the addition of those two little words of God fits the vindictive theology that many of us have grown up with, but they’re not in the Bible. They were added by the translators who wrote the New International Version. Not for the first time the NIV editors have put their own dark spin on God’s word. 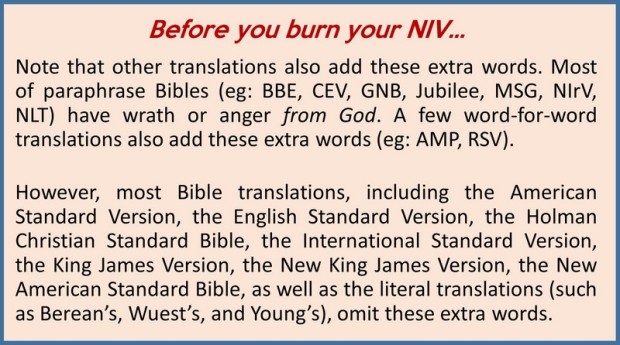 Here’s how the phrase appears in Young’s Literal Translation: “the anger did come upon them – to the end!”

“Sheesh, Paul. You’re getting worked up over two little words. Does it even matter whether the wrath is of God? It’s still wrath.”

Does it matter?! Well considering the NIV is arguably the world’s most popular Bible, with 450 million copies in print, I think it does. That’s nearly half a billion people who have been led to believe that the Bible says the Jews fell under the wrath of God when it doesn’t.

The NIV: “God smashed the Jews.”

The Apostle Paul: “Wait, what? I never said that.”

The NIV: “But that’s what you meant. Right?”

The Apostle John: “Oooh, you’ve been adding words to the Bible. You naughty!”

It’s one thing to interpret the Bible wrongly; it’s a whole other thing to add words to the scriptures to support your wrong interpretation. Paul never said a peep about the wrath of God. He was referring to Roman wrath.

“Wait a sec. Paul wrote his letter in AD51. Why does he say the wrath has come when the Romans were still 15-20 years away?”

Because he’s quoting Jesus. When Paul speaks of persecution, wrath, and killing he uses the exact same words Jesus used when prophesying about the days of vengeance. See for yourself:

The religious Jews had been murdering the prophets for centuries but Jesus said their time was up. Enough was enough. Their sins had heaped up and this generation would reap the wrathful harvest. So when Paul says “the wrath has come,” he is simply repeating what Jesus has said.

The wrath that has come was not divine punishment. Don’t let anyone tell you that God killed the Jews in AD70. The wrath of which Jesus and Paul spoke was the wages of the Jews’ heaped-up sins. After centuries of sowing hatred and violence, they were about to reap a wrathful harvest.

Sin bears bad fruit all of its own. Aggravate your boss and you may get fired. Cheat on your wife and she may divorce you. Murder those who seek to bring you peace and you may reap war.

“But doesn’t the Bible say elsewhere that there is wrath for those who reject Jesus?” Yes, but that is a different kind of wrath. It’s righteous wrath from a just God as opposed to state-sanctioned massacres dealt out by blood-thirsty legions.

If there is wrath for the Jew who rejects Jesus, it is the same wrath for the Gentile, and it is not dispensed by Romans, Nazis or any human agent.

Get your view of God from the Old Testament or badly-translated scriptures and you may think that God punished the Jews for killing his Son. This is a perversion of the gospel and a distortion of history.

The gospel declares that Jesus died for the Jews, not the other way around.

Adapted from chapter 23 of Paul’s new book AD70 and the End of the World.