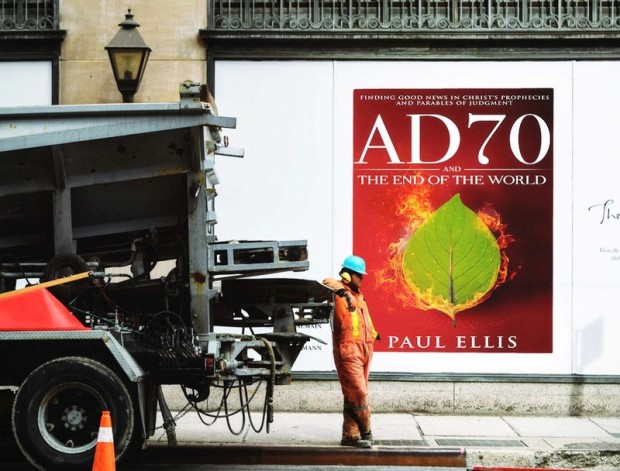 My new end times’ book has just launched and some of you don’t care. You don’t care because you’ve been burned by bad eschatological preaching. Or you’ve had unpleasant conversations. Discussing the end times is like discussing politics. No matter what you say, half the people in the room jump on you

“End times? Who needs it? Jesus wins, that’s all I need to know.”

This was certainly my view a few years ago.

But then some of you began asking me about the year AD70, signaling a growing interest in preterism. (Preterism, in contrast with futurism, is the view that Biblical prophecy has been fulfilled.) In the past three to four years, I have been asked more questions about AD70 than any other subject.

At first, I was reluctant to join the conversation. But then I thought, “Why not?” Surely if there is any subject in need of grace, it is the traditionally scary topic of what the future may hold.

Judgment Day, the rapture, the antichrist, and the great tribulation. The future is frightening. Which is puzzling, because if grace is good news today, how can it be bad news tomorrow? If the gospel is supposed to bring great joy, how can it inspire so much fear and anxiety?

Something doesn’t add up.

I decided to get some notes together, and by the time I was done I had written my biggest book. It’s forty chapters long, full of pictures, and covers 500+ scriptures. You already know the title – it’s called AD70 and the End of the World – but you may not know the subtitle: Finding Good News in Christ’s Prophecies and Parables of Judgment.

And yes, I do believe there is good news in Christ’s darker parables and prophecies.

In the new book I take a verse-by-verse look at Christ’s longest prophecy, and I unpack the good news treasures found in the parables of the vengeful landowner, talents, wedding banquet, and more. I also tackle big questions such as, when is the great tribulation, when is the Second Coming, and what happens when Christ returns?

“So are you a preterist, Paul?”

I get asked this question a lot, probably because of the book’s title. I also get asked if I’m a pre-trib amillennialist or a post-trib premillennialist or whatever other crazy combination of adjectives one can think of. It’s like a test. “Give me the right answer and we can be friends. Fail the test and I’ll diss you on Facebook.”

Full disclosure: I’m not interested in joining anyone’s eschatological club. However, I am passionately interested in exploring the beauty of Jesus and his wonderful words. What Christ said about the future is astounding. I didn’t know the half of it before I started writing the book. I have been so blessed reading his words through the lens of grace. Read this book and you’ll be blessed too. 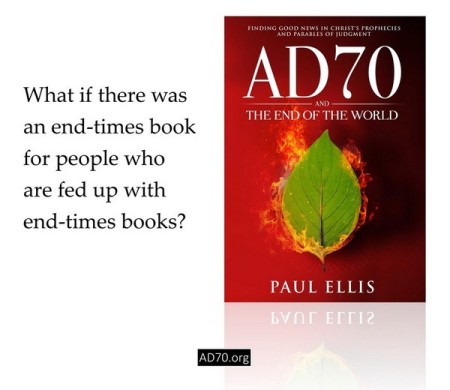 “So what makes AD70 different from other end times’ books?”

For starters, it’s light hearted, because we all need to lighten up on our traditionally dim views of the last days and what God has in store for us.

“So this is not a serious book then?”

It is seriously good fun! If God has great dreams for us then end times books ought to be inspiring, don’t you think? Yet many are patronizing or hysterical. They reek of fear and pride. They boast of secret knowledge and higher learning when they ought to boast of Jesus.

“But which side do you lean towards? Preterism or futurism?”

Do you mean which gang am I affiliated with? Neither. Both. I dunno.

But I can tell you that AD70 and the End of the World may be the only end times’ book that has been endorsed by both preterists and futurists. Surely that counts for something.

“So what is the book about?”

It’s about the last days and the fall of Jerusalem. It’s about the great tribulation, the rapture, and the return of Christ. It’s about the prophecies and parables of Jesus that have for too long been used to stir up fear when they ought to have inspired trust in a good God. It’s about a Savior who is no spectator but an active player on history’s stage. It’s about a King who has come and is coming again.

“Sounds good. Where can I learn more?”

You can also check out the Look Inside feature on Amazon.

“I don’t live in America and the shipping on your books is expensive.”

International retailers who carry this book are listed here. (Caveat: Some retailers won’t ship the book until after the official release date of September 24. Some, like Amazon, will let you have it now.) You can also get the book on Kindle and iTunes. The cheapest option is PDF.

I hope you enjoy the new book!

27 Comments on A Grace-Based View of the End Times