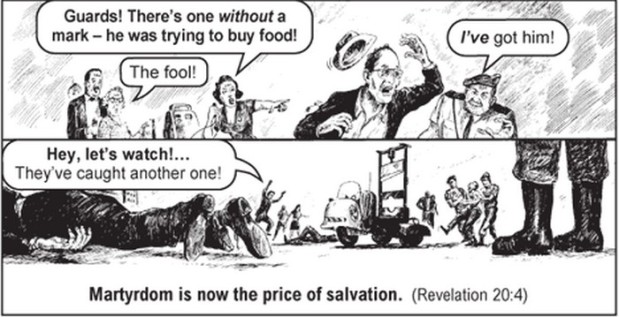 When I was a boy in Sunday School, I came across an end-times comic that featured believers being executed in something called a great tribulation. It was like a holocaust for Christians and it was coming soon! Probably in 1984. Or maybe 1988. But definitely by 1999.

It was years before I realized that cartoon was actually a form of child abuse, and that the great tribulation Jesus spoke of did not feature in my future.

What Jesus said about the great tribulation

As we have seen, Jesus listed ten signs in connection with a great tribulation and all of them were fulfilled within a five month period in AD70. Embankments, swords, captivity, suffering mothers, captive Jews – everything Jesus predicted came to pass.

So what? Why does this matter?

It matters because those who are worried about a coming tribulation are filling their bunkers with wheat and ammo when they could be telling others the good news of King Jesus.

It matters because our children are being told they’ll get their heads chopped off if they don’t take the mark of the beast, but they’ll burn in hell if they do.

And it matters because young people are holding out for the rapture lifeboat when they could be shining in a sin-darkened world.

If you are concerned about the great tribulation I’ve got good news for you. You will never experience it. Trials and regular tribulations? Sure, these are inevitable. But a great tribulation of unprecedented distress and destruction? It’s not going to happen. Not again.

Jesus doesn’t want you fearful but hopeful. If you are fearful of something that’s not going to happen, you are not walking in the will of God. Renew your mind, put your faith in Jesus, and watch those dark clouds lift.

And the next time something bad happens and the tribulation preachers start with their doom and gloom sermons, don’t listen to them. Peddling fear is an effective way to sell books, but they are bad books. Don’t read them.

If the U.S. dollar tanks or the European Union falls apart or bombs explode in Israel that does not mean the world is about to end. We may live in dark days, but we are children of the light. Get out of your bunker and shine for Jesus.

I have heard people say that more than two-thirds of humanity will be wiped out in a future tribulation and that God will be the one doing it. Nonsense. Don’t listen to such folk; listen to Jesus. See what he says about the great tribulation and decide for yourself who is right.

For then there will be great tribulation (affliction, distress, and oppression) such as has not been from the beginning of the world until now – no, and never will be [again]. (Matthew 24:21, AMP)

If I could travel back in time and visit my younger self, here’s what I would say: Don’t buy into any end-times message that fills you with fear. If you are worried about tomorrow, you are not walking in the full revelation of Jesus who is on the throne. Renew your mind and take those fearful thoughts captive to the obedience of Christ.

Don’t base your end-time views on teachings that contradict the words of Jesus, but fortify your mind with the promises of God’s word.

Extracted from chapter 30, “When is the great tribulation?” of Paul Ellis’ book AD70 and the End of the World.

Help these messages of hope and grace go further by supporting us via our Patreon page.

78 Comments on A Future Tribulation?