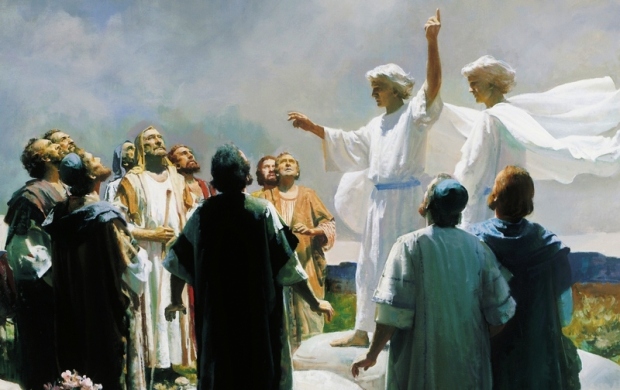 What do you make of these words of Jesus?

Then will appear the sign of the Son of Man in heaven. And then all the peoples of the earth will mourn when they see the Son of Man coming on the clouds of heaven, with power and great glory. (Matthew 24:30)

What is this prophecy about? And what is the sign of the Son of Man in heaven?

Mr. Futurist: “This is about Christ returning from heaven and coming back to earth.”

Mr. Preterist: “This is about Christ coming in judgment on Jerusalem.”

Actually, it’s about neither. It is about Jesus coming into his kingdom with power and glory. Jesus is quoting Daniel:

In my vision at night I looked, and there before me was one like a son of man, coming with the clouds of heaven. He approached the Ancient of Days and was led into his presence. He was given authority, glory and sovereign power; all nations and peoples of every language worshiped him. His dominion is an everlasting dominion that will not pass away, and his kingdom is one that will never be destroyed. (Daniel 7:13–14)

Daniel’s prophecy was fulfilled when the Lord ascended to heaven. He rose as a man, was led with honor into the presence of the Almighty, and given a name above all names. It’s just about the most thrilling thing that ever happened.

But what is the sign of the Son of Man in heaven?

Since Daniel’s prophecy is evidently not well-known, some have offered fantastic interpretations of the heavenly sign. Some say it was a cross that appeared in the sky around the time of the Roman siege of Jerusalem. A thousand years ago people thought it was a bright supernova. Thirty years ago people said it was Halley’s Comet. Today they say it’s blood moons, solar eclipses, and aligning planets.

Mr. Preterist: “This is all nonsense. The sign is Jesus returning in judgment to destroy Jerusalem, which he did in AD70.”

If that sounds a bit left-field to you (and it certainly does to me), you will be surprised to learn that many eminent theologians agree with Mr. Preterist. Matthew Henry said AD70 was “when Christ came to destroy the Jewish nation by the Roman armies.” John Gill said Matthew 24:30 was about Jesus coming to the Jews to “give the finishing stroke to the destruction of that people.” And Albert Barnes said the passage was most likely about the Son of Man “coming to destroy the city of Jerusalem.”

(Is it any wonder that many view God as vindictive and punitive when some of our most notable theologians believe Jesus destroyed Jerusalem?)

Personally, I think it’s incredible that Jesus, of all people, would talk about returning to destroy Jerusalem (and I don’t believe he did). But there are Old Testament scriptures one could draw on to make this connection. (If you’re interested, I discuss Isaiah 19:1, Joel 2:1–2 and Jeremiah 4:13 in my AD70 book. TL:DR; Jesus is not quoting those passages; he’s quoting Daniel 7, which has nothing to do with judgment.)

Anyway, I digress. Back to the Lord’s prophecy.

When did Jesus come into his kingdom?

Mr. Preterist would say it happened in AD70 for no other reason than there was a big fire. “When Jerusalem was burned by the Romans, the clouds of smoke signified Christ coming to his temple in judgment, power, and glory.”

“Seriously. Jesus said the Son of Man would come on the clouds and there were smoky clouds!”

It would be funny except many people actually believe this. They mix up various OT prophecies and scriptures about unrelated comings, and come to the awful conclusion that Jesus torched Jerusalem.

He didn’t. Jesus did not come into his kingdom in AD70 but 40 years earlier when he ascended into heaven, just as the prophet foretold. And just as he foretold. When Jesus ascended he disappeared into a cloud. “A cloud received and carried him away out of their sight” (Acts 1:9, AMP). There’s your cloud.

(The Bible describes at least five different “comings” of Jesus and it is easy to mix them up. However, the scriptures are consistent and clear. Whenever Jesus is described as coming with angels, he is coming to earth. And whenever he is coming on the clouds, he is coming to heaven.)

Jesus said, “The peoples (or tribes) of the earth (or land) will mourn.” In short, the Jews would mourn when they realized they had crucified the Messiah. Just a few weeks after uttering these words, his prophecy was fulfilled. On the Day of Pentecost, 3,000 Jews were pierced to the heart (Acts 2:37). Pierced means upset or deeply troubled. They were mourning the death of their Messiah. Throughout the New Testament Jews continued to mourn whenever the penny dropped. You can bet Saul was upset when he realized he had been persecuting the Lord (Acts 9:4).

It’s not what you think. The Interlinear Bible translates the words of Christ’s prophecy like this:

Then will appear the sign of the Son of Man in heaven.

Who’s in heaven? Not the sign but the Son. And what is the sign? It is Daniel’s vision come true. It is Jesus sitting enthroned at the right hand of God. It is heaven’s vindication for the One rejected by the Jews. The Son in heaven is the sign.

But how would the unbelieving Jews know that Jesus was sitting at the right hand of God? How would they see, as Daniel had seen, the Son of Man coming on the clouds of heaven?

They would know because his prophecies were all coming true. Jesus said there would be famines, earthquakes, and great distress, and there were. He said Jerusalem would be surrounded by armies, and it was. He said the temple stones would come down, and they did.

Jesus made no less than 40 specific prophecies about the fall of Jerusalem and all of them were fulfilled within 40 years. Each prophecy-come-true was a sign pointing to the One who had come on the clouds and now sat enthroned in heaven.

Adapted and extracted from chapter 14 of Paul Ellis’ book AD70 and the End of the World.

Sick of seeing Jesus portrayed as a monster who judges cities? Want others to hear about the Jesus who saves and forgives and shows grace to the worst of us? Support E2R on Patreon.

24 Comments on What is the Sign of the Son of Man in heaven?