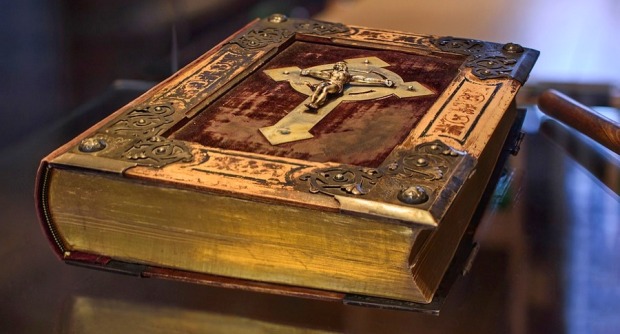 Men and women were made equal in God’s image (Gen. 1:27). Sin opened the door to discrimination, domestic violence, trafficking and all the other evils visited upon women. But Jesus showed us that God’s heart has always been to elevate women to their rightful place as co-heirs with him.

The Bible is not a sexist book, but what about specific Bible translations? What about the most famous translation of all?

The KJV – the most influential book in the world

The King James Version is an incredible book. A literary masterpiece, it introduced into the English language some of our most beautiful words and most memorable aphorisms. But like any Bible translation, it reflects the culture and theology of those who translated it. Which is why the 400 year old KJV seems to exhibit a subtle bias against women.

These are relatively minor examples. It probably doesn’t matter whether Priscilla is listed first or second. But what are we to make of this list of elder qualifications:

This is a true saying, If a man desire the office of a bishop, he desireth a good work. A bishop then must be blameless, the husband of one wife, vigilant, sober, of good behaviour, given to hospitality, apt to teach; not given to wine, no striker, not greedy of filthy lucre; but patient, not a brawler, not covetous; one that ruleth well his own house, having his children in subjection with all gravity (for if a man know not how to rule his own house, how shall he take care of the church of God?) Not a novice, lest being lifted up with pride he fall into the condemnation of the devil. Moreover he must have a good report of them which are without; lest he fall into reproach and the snare of the devil. (1 Timothy 3:1-7, KJV)

In this passage I have underlined ten gender-specific words (man, he, his) that show elders must be men. Guess what. None of them is in the Bible. They have all been added by translators.

“Paul, don’t tell me you’re one of those political correctness freaks who wants to ruin the Bible with inclusive language.”

Not at all. But I do believe a good translation should reflect what the Bible actually says. Translators ought not to change the meaning of words as they seem to have done in the passage above.

Read Paul’s original words or a literal translation of 1 Timothy 3 and you will find that his words are remarkably gender-neutral.

Big difference. In fact, it’s the sort of difference that might cause you to start asking questions about the role of women in the church.

“Whoa, slow down Kemosabe! Next you’ll be telling us that women can be elders.”

Who says they can’t?

But which Bible? The one written by Paul the champion of women’s equality? Or the version published in the name of a king who tortured women for fun?

It’s not about the king

Let me hasten to add that the KJV is one of my favorite translations. I love its beautiful phrases. Its contribution to language and theology is monumental.

And I am not suggesting that the KJV is sexist because King James was a mysoginistic witch hunter. I am sure the churchmen who translated the KJV were good men with pure motives.

But we must acknowledge that the translation of any Bible will reflect the norms of its time, and this is true of the KJV. Look at how 1 Timothy 3:1 appears in other early translations:

When King James issued his translators with instructions, he told them to follow existing Bibles as closely as possible, and they did. Why does the 17th-century KJV say “any man” in 1 Timothy 3:1? Because every 16th-century English Bible says it.

The real question to ask is why these old Bibles say “any man” when Paul said “any one.” Their translators were either masculinizing scripture in a way that was consistent with cultural norms, or they understood that any man meant any one. Maybe it wasn’t a big deal to them anymore than the messianic phrase “Son of Man” is no big deal to us.

When the angels sang, “Glory to God in the highest, and on earth peace, goodwill toward men” they weren’t excluding women from the favor of God. In older Bibles, men means people.

The Greek word for humanity (anthrōpos) is translated as man 552 times in the KJV. In modern translations the word is normally translated as people. So either the KJV translators were wrong 552 times, or in the seventeenth century man meant humanity.

It’s important that you get this because those who do not grasp these distinctions can get into serious error. Read an older translation (such as the KJV) with modern eyes and you may come away thinking that women cannot be bishops and Phoebe was nothing more than a delivery girl. You could get a distorted view of what the Bible actually says about women.

You may think that the Bible commands women to be silent in church, when it doesn’t.

And you may think the Bible says women can’t teach and preach when it doesn’t say that either.

Paul never said elders must be men; not once. And why would he? Paul worked with women all the time and he named and praised women leaders in his letters.

To be fair, Paul did include one male-specific word in his list above, and that word is husband, as in elders need to be husbands of one wife. Which makes it sound like elders must be men. They don’t. Paul is talking about something else.

If any woman desires the office of elder, she desires a good thing

The idea that only males can shepherd the church of Christ is a malodorous tradition that reeks of Athenian philosophy. God made Adam and Eve equal and commissioned them to rule or lead together. Tremendous harm is done to all when we tell women that they are inferior, unequal, and unable to walk in the calling God has given them.

I appreciate this may offend those of you who believe the KJV was delivered from heaven on a silver cushion. If so, then you are too easily offended. We ought to be more concerned with the way women have been treated in the church. They have been marginalized, demonized, and burned at the proverbial stake. They’ve been told to remain silent and to endure domestic abuse because it’s God’s will for them to submit. The Bible says so.

These ancient evils have many causes and I’m hardly laying the blame on the KJV. But understanding how Bible translations can perpetuate a distorted view of scripture is a first step towards remedying this injustice.

Extracted from Dr. Paul Ellis’s new book, The Silent Queen: Why the Church Needs Women to Find their Voice.

22 Comments on Is the King James Bible (KJV) sexist?