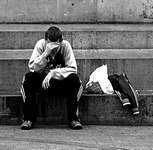 What do you do when you get discouraged? Maybe you’re discouraged right now. If so, you’ve come to the right place! I’m going to tell you something Jesus said that will set you free. His words are found in a story about a widow whose pleas for justice were being ignored by a bad judge (Lk 18:1-8).

In Part 1 of this two-part study, we looked at how some have used the Parable of the Persistent Widow to preach a message of human effort. They say, “pray and never give up” as if God were impressed by our many words.

I used to quote this text when preaching on persistence until I realized that I had missed what Jesus was really saying. But it certainly doesn’t help matters when the NIV translates the opening verse of Luke 18 like this:

“Then Jesus told his disciples a parable to show them that they should always pray and not give up.” (NIV)

This translation naturally leads to thinking in terms of persistence and human effort. It sounds very much like Jesus is saying that the key to breakthrough is to pray and pray and pray. But look at how this verse is translated elsewhere:

“And he spake a parable unto them to this end, that men ought always to pray and not to faint.” (KJV)

The Greek word for faint, ekkakeo, means to “be wearied” or “lose heart” or become “utterly spiritless.” Given the context of the poor widow’s plight, perhaps the best translation of Luke 18:1 is this one:

“Then Jesus told his disciples a parable to teach them that they should always pray and never become discouraged.” (GNB)

If anyone ever had a good excuse to become discouraged, it was the widow in Luke 18. She was being exploited. She needed justice but thanks to the wicked judge there was none to be had.

Never, ever, ever discouraged

Have you ever been unjustly treated? Then you may know what it means to lose heart and get discouraged. Yet Jesus says it’s possible to never become discouraged. And he should know. Look at all the injustices Jesus had to deal with. He was falsely accused, sentenced to death by a corrupt official, abandoned by his friends, scourged, then nailed to a cross. Yet Jesus was never discouraged. No doubt he was tempted, but he overcame every time. That’s why you never heard Jesus say, “I give up” or “God doesn’t care.”

What was his secret? How did Jesus defeat discouragement? He lived in a kingdom where justice reigns!

Jesus had to deal with the injustices of life like any man. Yet he never lost heart because his heart was fixed on a higher reality. Down here men were cursing him. Up there his Father was declaring, “this is my Beloved Son in whom I am well pleased.” There is a great example for us here. Jesus did not let his unjust circumstances dictate his reactions. Instead he kept his focus on his Father knowing that vindication would come from above.

We live in a fallen world where injustice seems to reign. Bad things happen to good people. The strong oppress the weak. The rich exploit the poor. Bosses mistreat their workers. Disease and death afflict the healthy. The unborn are slain on the altar of convenience while millions of children die from preventable causes. And humanity cries out, “it’s not fair!”

“Of the increase of his government and peace there will be no end. He will reign on David’s throne and over his kingdom, establishing and upholding it with justice and righteousness from that time on and forever. The zeal of the LORD Almighty will accomplish this.” (Isa 9:7)

Strangely, you will find some in the church who are nervous about God’s justice. They don’t even want to talk about it. But only those who love iniquity need fear his justice. Those who love Christ and are robed with his righteousness know that his justice is sweet. And like the prophet Amos they will not be satisfied until his “justice rolls down like waters, and righteousness like a mighty stream” (Amos 5:24).

What is God’s plan for dealing with the epidemic of injustice? Jesus!

Christ was sent to “proclaim justice to the nations” (Mt 12:18) and lead “justice to victory” (Mt 12:20). Here’s what the prophet Isaiah said the Savior would do:

“In faithfulness he will bring forth justice; he will not falter or be discouraged till he establishes justice on earth.” (Is 42:3-4)

Now at this point some Christians will say, “I long for that day when Jesus returns and the old order of things passes away.” That’s like saying he is a God of “eventual justice.” We have injustice now, but one day, eventually, we will have justice. That day is indeed something to look forward to. But God is also a God of “quick justice.” This is the whole point of the story of the widow:

“And will not God bring about justice for his chosen ones, who cry out to him day and night? Will he keep putting them off? I tell you, he will see that they get justice, and quickly. However, when the Son of Man comes, will he find faith on the earth?” (Lk 18:7-8)

A just king has come

When injustice comes and life serves you a cold dose of harsh, unfair reality, you have two choices. You can look at the circumstances and get discouraged, or you can fix your eyes on Jesus who is your vindication (Ps 17:2). Don’t pray like a victim. Don’t pray like an unbeliever. Pray with faith that a just king has already come and established his justice here on earth. Maybe the trial you are facing is huge. Jesus is bigger still! Maybe the entire world is picking on you. Look to your Father who justifies you! Look to Jesus who intercedes for you!

Are you sick? Then proclaim Jesus by whose stripes you are healed (1 Pet 2:24). Are you being mistreated? Then proclaim Jesus who liberates the oppressed (Lk 4:18). Whatever injustice you are battling with, proclaim Jesus! His victory at the cross brought you salvation and healing, deliverance and favor, righteousness and justice. If you aren’t seeing these things, then declare the words of Jesus to your circumstances. When Jesus speaks injustice must shut its mouth.

I will never preach about men when I can preach about Jesus. You want a champion of persistence? You want a role model who never gave up? Don’t look to the widow – look to Jesus! He faced more injustice than anyone yet he was never discouraged. He was knocked down to the grave but he rose again in triumph. At the cross he conquered injustice. Now he sits vindicated and enthroned at the right hand of the Father.

When trials come and you begin to lose heart, put your faith in Jesus. He is the Overcomer. He is your True Champion of Justice.

8 Comments on How to Really Overcome Discouragement: Lessons from the One Who Never Lost Heart