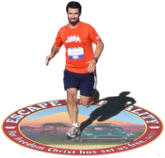 I’m a bit of a runner. Last year I clocked up 500 miles in runs around my neighborhood. No marathons or ultras or anything like that. Just regular 5 mile runs and the odd 10k race.

I’m not particularly fast and I’m not going to win any gold medals, but I am pretty confident that my physical discipline is earning me big points with God. The Bible says so:

I beat my body and make it my slave so that after I have preached to others, I myself will not be disqualified for the prize. (1 Cor 9:27)

I hope you can tell I’m joking. Physical training has some value but doesn’t figure much in the eternal scheme of things. And yet, to some, apparently it does.

“Join God’s Gym and sweat your way to salvation”

I’ve heard people use the verse above to sow fear and insecurity into the hearts of God’s children. They say, “If the mighty apostle Paul was worried about disqualification, you should be too!”

Well, okay, but if that’s what you’re going to preach, then preach the whole verse, not just the end. Tell people they need to buffet their bodies to stay qualified and then turn your church into a gym. Forget about the cross – you’ve gotta sign up for CrossFit!

What a sad joke.

I hope you can see that Paul is speaking metaphorically. In fact, he is comparing the Christian race to running in the Olympics:

If you conclude from this passage that not every Christian will make it – some will be disqualified – then you must be consistent and say, “only one gets the prize.” In other words, only one Christian will win this race. And since that will probably be Paul himself, or maybe Reinhard Bonnke, the rest of us might as well give up now.

Of course Paul is not saying that! His point is that just as runners are motivated, so are we. In fact, we should be more so, not because 99% of us are going to fail, but because we’re in this for an eternal crown that lasts forever.

Now here’s the important bit – the bit where the metaphor breaks down: we don’t get the crown because we run well, rather we run well because there’s a crown in store for us. Paul makes this clear in the next verse:

How can we lose?

Now that we see that Paul is not threatening the saint’s salvation, we can ask, What is the disqualification that Paul is referring to? The context of this passage is Paul’s rights as an apostle and preacher of the gospel:

The Corinthians hadn’t been generous in supporting Paul’s ministry and Paul’s response is two-fold: (1) I have a right to receive material support from you (see verses 3-12, 13-14), and (2) I happily waive this right if doing so promotes the gospel (see verse 12, 15)

It’s a delicate subject, this business of paying preachers, but Paul’s words reveal something splendid about his heart for the lost:

And then, just in case we might miss the point, Paul plainly states his motive:

This is a very important scripture and you may want to check it out it in your own Bible. Note that some translations omit the word fellow but that’s the key word. Paul isn’t travelling around the world and preaching to Jews, slaves, and the weak to become a partaker of the gospel – he’s already a partaker – but to become a fellow-partaker. He’s doing it because he wants to share the blessings of the gospel with others:

The Corinthians were stingy but Paul wasn’t worried about the money. As long as he got to preach and lead people to Jesus, that was reward enough. Jesus died for people not money and Paul wanted to make sure Jesus got what he paid for:

For what is our hope, our joy, or the crown in which we will glory in the presence of our Lord Jesus when he comes? Is it not you? Indeed, you are our glory and joy. (1 Th 2:19-20)

To re-cap: Paul is not saying we can be disqualified or lose our salvation anymore than he is saying we are saved by going to the gym. He’s speaking metaphorically. Unlike Olympic runners, our crowns are assured – all in Christ win because Christ has already won.

So the wrong question to ask is Can I be disqualified? (You can’t.) A far better question is…

Why does Paul do the things he does?

Why does Paul buffet his body and run with purpose and pretend to be an Olympian? Why does he pretend to be a slave, a Jew, and under the law? Here is my paraphrase of Paul’s answer:

I’ve got a great and wonderful job – preaching the gospel. This job has its rewards and I want them. I want to see people set free for Jesus. That’s my passion. It’s what gets me out of bed each morning.

Doing this job well requires I maintain my fitness and health, which I do. Like a runner or a boxer at the Olympic Games striving for the prize, I’m intentional about this. I’m not mucking about. I’m not like those runners who don’t qualify and go home early. Not me. I’m in this to win and win big. Lotta people out there and Jesus loves them all. He paid a high price to redeem them and I’ll do whatever it takes to get them. I’ll become a slave or a Jew. I’ll even act like I’m under the law – yeah, can you imagine me acting like I’m under the law?! But that’s how serious I am. No way I’m going to be short of friends in the age to come!

Those Olympians run for a wreath that doesn’t last. But we’re all getting a crown that lasts forever. We began this race at the finish line. Since God keeps us strong to the end, we can’t lose. So, my brothers, run hard and run well!