In our ongoing series on the wrath of God, there is an important scripture we have not yet looked at. It’s this one:

For you, brothers, became imitators of God’s churches in Judea, which are in Christ Jesus: You suffered from your own countrymen the same things those churches suffered from the Jews, who killed the Lord Jesus and the prophets and also drove us out. They displease God and are hostile to all men in their effort to keep us from speaking to the Gentiles so that they may be saved. In this way they always heap up their sins to the limit. The wrath of God has come upon them at last. (1 Thess 2:14-16)

What is Paul saying here? And what is the wrath of God that has come upon the Jews at last?

The traditional answer is that Paul is referring to the destruction of Jerusalem which took place in AD70. The 17th-century commentator Matthew Henry wrote that by killing Jesus and obstructing the gospel “thus did the Jews fill up their sins… Not many years after this Jerusalem was destroyed, and the Jewish nation cut off by the Romans.”

According to Mr. Henry, the Romans were God’s agents of wrath. They were the means by which God dealt with the “heaped-up sins” of the Jews.

I disagree. There is and only ever has been one means for dealing with our heaped-up sins and it’s not murderous Romans legions – it’s the cross!

As we have seen in this series, God’s wrath was poured out on all sin at the cross. Jerusalem was not destroyed as some kind of divine payback for killing Jesus. Jerusalem was destroyed because the Jews rejected those things that bring us peace. They spurned the Prince of peace, yanked on the tail of the Roman tiger, and reaped Roman consequences.

Why does this matter? Because if God used the Romans to punish the Jews, then God might use Romans to punish you. Indeed, many people think this is exactly what God does. He sends storms to chastise America for its sins. He allows gunmen to shoot up schools and terrorists to blow up children because he is a God of justice who will not tolerate sin. 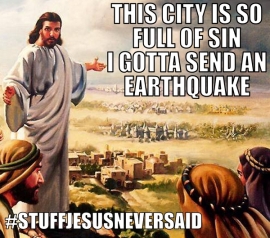 It’s as if Jesus never came.

(Sidebar: An earthquake flattened my hometown and years later misguided “prophets” are still telling people God did it. Here’s my response to that nonsense.)

Yes, Paul said the Jews killed Jesus but he also said “I wish that I myself were cursed and cut off from Christ for the sake of my brothers, those of my own race” (Rom 9:3). Paul didn’t want vengeance for the Jews – he wanted grace! So does God.

So why does Paul say God’s wrath has come upon them at last?

Short answer: Because they will soon be dead and when you are dead it’s too late to be saved from the coming wrath.

As we have seen elsewhere, the phrase “the coming wrath” refers to God’s ultimate cleansing act when he removes, once and for all, those things that are contrary to his good character. Judgment day, in other words.

People are destined to die once, and after that to face judgment (krisis). (Heb 9:27)

Two things in life are certain: death and krisis. Krisis literally means decision or verdict. It’s the answer to the question, what did you choose? Did you choose the life that Christ freely offers or did you spurn it? Did you choose his grace or your own merits? Did you choose to follow Adam (self-trust) or Jesus (faith in God)?

Everyone faces a day of judgment but for those in Christ, that judgment is in the past. Jesus said, “he who hears my word and believes in him who sent me has everlasting life, and shall not come into judgment” (John 5:24). The person you used to be died with Christ on the cross and in him you have been judged righteous for all time. But for those who hear and reject Christ’s word, their judgment remains in the future. The final outcome has not been decided.

The passage about death and judgment comes from the letter to the Hebrews. This letter was addressed to the Jews, some of whom had chosen to cut themselves off from the grace of God by rejecting Christ. To this group the writer of Hebrews says judgment day is yet to come. (This in itself is grace and mercy – there is still time to take hold of life and the writer of Hebrews exhorts them to do this again and again. But he also appreciates that for those who have tasted the heavenly gift and spat it out, more time may not help. Their minds are made up.)

When you realize that judgment follows death, you will appreciate that Paul is describing not one but two imminent tragedies. The first tragedy is that the Jews are on a collision course with Roman brutality. Their date with death is fast approaching. Paul is saying, “The Jews are hostile to all men – they were hostile to Jesus (he forgave them), they are hostile to us (my heart is that they will yet be saved), and they are hostile to the Romans (who won’t be so nice with them).” Jesus won’t pay them back for their sins and nor will Paul. But the Romans surely will, and in spades.

Although the siege of Jerusalem is still some 20 years in the future, Paul can see it coming. (So could Jesus – see Luke 19:41-44). He knew that one day they would reap trouble for their trouble and in AD70 they did. That’s the first tragedy.

The second and greater tragedy is that after the Jews die, they will reap the consequences of their decision to spurn Christ. They will have their Krisis Day (see Hebrews 10:26). And this is why Paul says God’s wrath has come upon them at last or “to the uttermost.” The religious Jews have been so consistently stubborn (“they killed the Lord Jesus and the prophets and also drove us out”), and their death is now so close, that the final verdict is as good as in. Paul is not saying “God is fed up with the Jews.” He’s saying, “These stubborn guys are so set in their course that their final end is obvious and all but unavoidable.” Those who reject the gift of eternal life reap a second death as surely as night follows day.

“That’s a bit rough. I normally like your posts, Paul, but this one is not good news at all.”

I agree. It’s heartbreaking, especially when you consider what these Jews had experienced. Many of them had personally encountered Jesus. They had seen him heal the sick and raise the dead. They had heard the gospel straight from his mouth. Yet they hated it and they hated him.

The religious Jews weren’t in the dark except by choice. They opposed Jesus and then they opposed the apostles. They would’ve seen their friends responding to the message of grace with joy and thanksgiving but they themselves remained stubborn and hostile. When the famous Pharisee Paul came to Jerusalem proclaiming the good news in a language they understood, they conspired to kill him.

Unbelief is hard work. You need to apply yourself with religious fervor and tragically, the Jews did. They hardened their hearts to the good news of grace and embraced the politics of violence. They said, “We don’t want your kingdom Lord, we’d rather make our own. Keep your gospel of peace, we prefer the sword.” They set their own course and reaped the whirlwind.

Even so, they had plenty of time to change their minds. The Romans were a long time coming. After the cross the Jews still had 40 years to embrace those things which would’ve brought them peace. Some did and they escaped the Romans and were saved from the coming wrath. But many Jews preferred the fatal choice.

It was a tragedy long in the making and Paul had a front-row seat. He knew it would end badly for the religious Jews and he risked his life in the hope that he might change the outcome. Sadly, the Jews treated him the same way they treated Jesus. This broke Paul’s heart. When he saw the end of the Jewish nation approaching, he said with tears, “The wrath of God has come upon them at last.”

What do we take away from this?

If we won’t receive love, we won’t really live, for a life without love is no life at all. We may fill our lives with politics, business, or religion but we do so at the cost of our true selves. We were born to be loved and to give love in return. The ultimate expression of love is found in Jesus Christ. He alone satisfies our deepest need for love, identity, and belonging. To scorn his love is to scorn life itself. 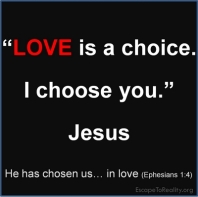 This is what the religious Jews did. In their hard-hearted opposition to the good news of God’s love and grace, they made the fatal choice to pursue the self-made life, which is no life at all. Live this way – rejecting all that is truly good and truly life – and in the end, nothing remains.

The good news is that the fatal choice is the harder one to make. We were all made for love. We need it like we need air. We have been hardwired to respond to the grace of God. It makes no difference whether you’ve been good or bad, upright or uptight, Jesus draws us all to himself (John 12:32).

POSTSCRIPT: About a week after I published this post, a reader alerted me to an interesting fact. The qualifier “of God” is not in the original Greek. It was added by NIV (and other) translators. Paul’s actual words are: “the wrath is come upon them to the uttermost.” This begs the question – who’s wrath is Paul referring to? God’s wrath or Roman wrath? It seems to me that either choice leaves us with plenty of room to doubt the traditional interpretation that God was punishing the Jews. If it was God’s wrath, see my explanation above. If it was Roman wrath, no explanation is needed. (With thanks to Adrian Clark.)