“Here is a trustworthy saying: If we died with him, we will also live with him; if we endure, we will also reign with him. If we disown him, he will also disown us; if we are faithless, he remains faithful, for he cannot disown himself.” (2 Tim. 2:11–13)

This is a trustworthy saying that comes in two parts and both parts are trustworthy for the simple reason that Jesus is trustworthy, even when you’re not.

Destined to reign in life

The first part of the trustworthy saying begins like this: “If we died with him.” The Christian life begins at death. This is what makes the gospel unique. Every manmade religion preaches self-denial and dying to self, but the gospel simply declares, “You died.”

“But wait,” says Paul. “There’s more. This trustworthy saying comes with bonus features. We don’t merely live, we also endure and reign.” This new life we have in Christ is a new kind of life characterized by supernatural endurance and reigning in all things.

If Paul had said, “Work hard and endure and maybe you will get to reign,” that would be nothing special or trustworthy. That’s how the world works. But it’s not how the kingdom works.

Verse 12 follows right after verse 11. Paul is describing the life we have in union with the One who already overcame, already endured, and who now reigns. “This life we have in Christ is an enduring and reigning life,” says Paul. “It’s like nothing on earth.”

Do you see? In the first part of the trustworthy saying, Paul is giving us a three-part punchline. “You know you died with Christ, right?” Yes, Paul, I know. “Well do you also know that you will live with Christ?” Sure, Paul, in heaven. “No, not just in heaven, but here and now. You will endure here. You will reign in life here. This is a trustworthy saying that deserves your full acceptance.” Oh, I didn’t know that Paul. That’s really good news!

Many Christians are looking forward to a future life with Christ but they are not ruling and reigning with him here and now. They don’t know they can. They’ve been told life is one big test and maybe, if they are careful, they’ll get a crown at the end. But the abundant life Christ promised is experienced by those who know and trust him now. 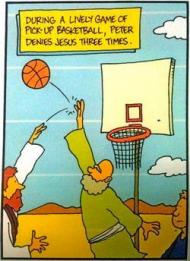 What if I disown Jesus?

This brings us to the second part of the passage: “If we disown him, he will also disown us.” The King James says, “If we deny him, he will deny us” (v.12) which is a better translation since it’s the same word Jesus uses in Matthew 10:33.

An insecure believer worries, What if I deny Jesus in a moment of weakness? But Paul is not talking about this. He is not talking about Christians at all, but those who reject Christ and will one day reap the consequences of their choice. There’s no grace for the faithless because the faithless will not receive it. If you don’t believe God is good to you, you will have difficulty experiencing his goodness.

Do you see? There are those who confess Christ and those who deny him. If you have denied him, you may yet confess him, but if you have confessed him, you cannot deny him – at least not to the point where he would deny you.

If we are faithless, he remains faithful, for he cannot disown himself. (2 Tim 2:13)

This verse has been used to sow fear into the hearts of the saints. “If you are not constant in your faith every single day, if you disown Jesus just one time, God will punish you!” It’s as if the preceding verses weren’t even there. It’s as if your unfaithfulness (or sin) was greater than his faithfulness (or grace). Hear that slap? That’s the Apostle Paul doing a face-palm!

To recap, Paul says if we die with Christ, we will live, endure, and reign with him. Each follows the other and this is a trustworthy saying.

Will Jesus deny me?

Dead religion says you have to perform and endure to be saved, but the gospel of grace says we stand on Christ alone. He is our rock, and our sure foundation. We stand on his promises, not ours.

We who have acknowledged Christ before others cannot unacknowledge him. We who have died with Christ cannot un-die. We who have been born again cannot be unborn. If you were to deny him, as Peter did three times, Jesus won’t disown you, for he cannot disown himself.

Adapted from The Gospel in Twenty Questions.

Start your journey to freedom now! Become an email subscriber today. Everything here is free thanks to our awesome readers.