When you’re sick, the last thing you want to hear are pithy, powerless platitudes from people who are healthy. What you want to hear is good news from someone who has experience healing the sick. This is why I recommend two outstanding books on healing.

The first book is probably the most practical, down-to-earth book on healing you’ll ever read. There’s no hype, just good instruction from a paramedic who has met and healed many sick people. (An ambulance medic who wrote a book about divine healing. Brilliant!) Here’s a taste:

Divine Healing Made Simple deals with a number of myths (“God gave me this sickness to teach me character”) and misperceptions (“I’m not good enough to be healed”) that some have about healing. It also addresses lame excuses (“I don’t have the gift of healing”) and puzzling questions (“Why do people known for their healing success sometimes get sick?”).

But the best thing about this book may be the many practical suggestions on how to minister and receiving healing – suggestions that are based on Praying Medic’s own experience in the field. Here are two:

Among my friends who have the highest success rates in healing, there is agreement on one approach that seems to work best. It involves commanding sickness or pain to leave and commanding healing to take its place. Don’t beg or plead with God to heal anyone. The most common mistake people make is begging God to heal. The second is quitting too soon… The vast majority of healings I’ve seen came because I stood there looking like an idiot, repeatedly commanding an injury to be healed until it finally was healed. (p.105)

There aren’t any formulas to this – it’s all faith – but there are definitely some poor ways to pray for healing. As I have explained elsewhere, you can pray like a beggar (“Oh please God”) or a commander (“Sickness be gone!”), but the former approach is seldom based in faith.

Divine Healing Made Simple is a practical and prophetic book that will inspire you to rise out of the rut of powerless religion and take the sort of faith-risks that were commonplace for Jesus and his first-century followers. 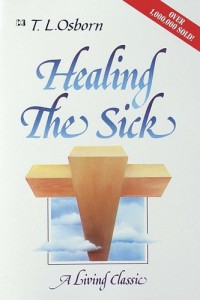 Healing the Sick, by T.L. Osborn

With more than a million copies in print, chances are you’ve read this book. It’s a classic. Like the book above it’s a solid introduction to the subject of healing written by someone with considerable experience. TL Osborn regularly ministered to tens of thousands of people at a time and typically saw amazing healings in his meetings (cripples running, blind seeing, etc.).

In the Bible we are told that supernatural signs and wonders will follow the preaching of the gospel (Mark 16:20). Miracles happen among those who hear the gospel because the gospel is the power of God for salvation and healing (Rom 1:17). The vast majority of people who were healed at TL Osborn’s meetings weren’t prayed for. They simply received the gospel with faith and were healed. It’s a sign to make you wonder.

At the end of this book (I have the 1992 edition), there is a long chapter called “Our Witness.” It’s a record of evidence of supernatural healings, such as this one:

Juan Santos… had been shot through the spine, destroying his spinal column and the nerves below his waist. It left him totally paralyzed… He dragged himself on the ground with his hands… His head also shook because he had attempted suicide by hitting himself with a club; but the blow only caused the palsy. He could hardly talk because his tongue and throat were partially paralyzed… He was instantly healed and is now as perfect as any man could be. (p.290)

This book is a stick of dynamite for blowing up the dams of doubt in your mind. The stories in it will stir your faith. You’ll read them and think, “If one man can get healed, so can I!”

And this attitude is important because faith and doubt are contagious. As the saying goes, “Feed your faith and starve your doubts.” These books will feed your faith. They’ll do it by painting a picture of life as Jesus defines it.

The last time I saw a healing was this morning. Healing the sick should be normal for a follower of Jesus – Jesus said so (Mark 16:18). But it won’t be normal for you if don’t believe it or if you don’t know how to go about it.

You may think, “This is not for me. I’m not that kind of person. I don’t heal people.” Don’t you believe it! Healing is your Christ-bought prerogative. It is your blessed right as a dearly-loved child of God. If you’ve never seen a healing, don’t feel condemned. Instead, renew your mind and start thanking Jesus in advance for the gift that is already yours in Christ.

60 Comments on Two books on healing