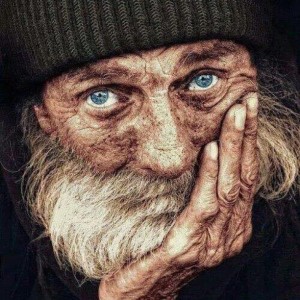 Tradition has taught that Job endured unimaginable suffering with poise and noble patience. He was a giant of the faith who never said anything wrong, and he is a great example for us all to follow.

As we have seen, Job was, at times, a self-righteous whiner who complained to high heaven. He blamed God for his troubles and accused the Lord of being unjust.

Yet somehow this makes me like Job more because I have gone through tough times and when I did I wrestled with the same sorts of thoughts he had.

“God where are you? Lord, do you hate me? Why have you forsaken me? Do you even care?!”

Silly stuff, but understandable. In our moments of weakness we are all tempted to speak like this.

The Book of Job records the dumb things people say when they go through hardships, ignorant statements like “God gives and takes away.” Sadly, we have paid more attention to the words of hurting men than the healing words of the Lord, and what he says in the Book of Job is, quite simply, amazing.

What did God say?

And the Lord said unto Satan, Hast thou considered my servant Job, that there is none like him in the earth, a perfect and an upright man, one that feareth God, and escheweth evil? (Job 1:8, KJV)

As we have seen, Job was far from perfect, yet God calls him “a perfect and upright man.” Job was fearful and superstitious, yet God says, “That’s my guy.” A few verses later the Bible makes one of the most outrageous statements in history:

In all this, Job did not sin by charging God with wrongdoing. (Job 1:22)

Are you kidding me?!

Job charged God with wrongdoing again and again. He said God was unjust (Job 27:2), had shot him full of poison arrows (Job 6:4), and made his life bitter (Job 27:2). He said so much dumb stuff that Elihu called him a nonsense-spouting ignoramus (see Job 34:35 and 35:16, especially in the Message Bible).

Yet the official verdict, according to the Judge of all men and as recorded in scripture for all to see, is that Job said nothing wrong. According to the Bible Job didn’t blame God, even though he did.

What’s going on? Is God mistaken in his assessment of Job? Is the Bible in error?

God sees all things from the perspective of eternity. He sees the end from the beginning. He knows that Job is going to come through his trial and be radically changed by grace. Job is not righteous and perfect because his behavior is impeccable or because he speaks well or sacrifices animals.

Job is righteous because God says so and what God says comes true.

Think of Gideon cowering in the wine-press. “Mighty warrior,” says the angel of the Lord, and even though it’s not true it becomes true because God says so.

Why does God’s Word say Job did not sin even though he sinned again and again?

Because love speaks to our true identity rather than our circumstances. Clothed with the righteousness that God gives, Job is not judged a sinner but a righteous man, even though his deeds were far from righteous.

(If you find this hard to swallow, the Bible does the same thing in Hebrews 11 when it looks back on a bunch of murderers and adulterers and calls them heroes of the faith and makes no mention of their sins. Love keeps no record of wrongs (1 Cor 13:5))

God does not treat Job as his sins deserve but relates to him on the basis of grace. This is good news for those of us who have sinned, like Job, and missed the mark. Your story may be one big disaster movie – one epic fail after another – but grace will change your story and give you a better ending than the one you deserve.

There are two ways to read this passage. DIY religion says, “See Job. Study Job. Be like Job.” But that way lies self-trust and disaster. Job wasn’t the self-made hero religion makes him out to be and neither are you. You’re simply not strong enough to face life’s trials on your own.

But read this passage through the lens of grace and the message is, “See the love of God! Look what God does for sinners like Job!”

It’s important you get this because if you put Job on a pedestal you’ll miss the grace of God. Sadly, that is what has happened in much of the church. By turning Job’s story into a flesh-glorifying pep talk, we have cut ourselves off from Christ and positioned ourselves for failure.

To the degree we exalt Job we diminish grace.

If Job was a perfect man, he would have had no need of God’s aid. But Job was an imperfect man with a very great need. When he finally saw this – after 40 long chapters of introspective pity-partying – he was greatly blessed. What the devil stole, God restored twofold.

Don’t you love this?

The devil knocked Job down, but God lifted him up. The devil sifted Peter, but God made him an apostle.

The devil may take your job, your health, your life, but God has the last word and ALL THINGS work out good for those who know his love.

How do I know? Because God said so.

The Book of Job isn’t about a good man going through bad times, but a good God who loves us through thick and thin and who desires to bless us no matter what we’ve said or done.

That’s the real message of Job and that’s the good news of grace.