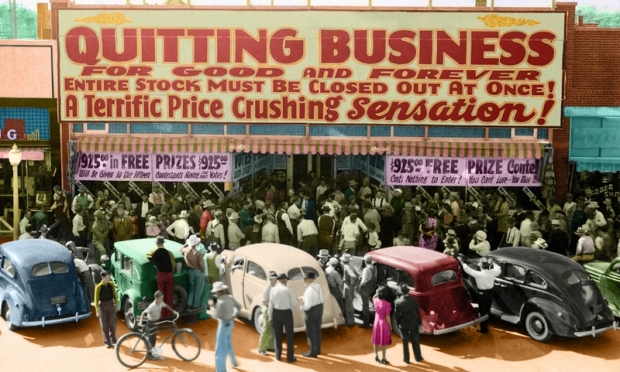 The Bible is full of treasures that we are afraid to open. We fear scriptures that are meant to bless us, and we run from words that should fill us with joy. Here’s an example:

There is treasure here. Do you see it? Do you realize what Jesus is saying?

“He’s saying we have to sell our stuff to be saved. Being rich is wrong because ‘it’s hard for a rich man to enter the kingdom’.”

Nope. It is harder for the rich and self-sufficient to receive from the abundance of God’s grace, but the kingdom is received, not purchased. “Your Father is pleased to give you the kingdom,” says Jesus in the previous verse.

“He saying we have to sell our stuff to be blessed. ‘Blessed are the poor’ and all that.”

Nope. The poor are blessed if their poverty leads them to Jesus our Source, but poverty is not a blessing. Nor do we earn the Lord’s unmerited favor by selling our stuff.

“Giving to the poor earns us heavenly brownie points.”

“He’s addressing the idolatry of the rich young ruler.”

Nope. Wrong story. In Luke 18, Jesus tells a rich young ruler to sell his stuff, but here in Luke 12, Jesus is talking to his disciples. So what is he saying?

Sell your possessions and give to the poor. Provide purses for yourselves that will not wear out, a treasure in heaven that will never fail, where no thief comes near and no moth destroys. For where your treasure is, there your heart will be also. (Luke 12:33-34)

There is nothing wrong with owning a nice house and car. But if all you have to show for your life is a bunch of moth-eaten, rusty toys, then you have not spent wisely. You’ve made inferior investments and settled for an empty life when you could have a life full of everlasting friends (see Luke 16:9).

Sell your possessions and give to the poor, and you will have treasure in heaven. (Matt. 19:21)

Stuff is nice, but stuff don’t last. Your pretty phone will eventually end up in a landfill. Your precious car will one day be crushed into a brick. But friendships forged in Christ endure forever.

So much time and effort is spent debating heavenly treasures as though they were some great mystery. What are they? How do we get them? Jesus makes it plain: “You want heavenly treasure? Sell and give to the poor.” That’s it.

What’s so special about the poor?

The church has a funny relationship with the poor. We feel guilty if we ignore them, and smug if we help them. How does Jesus want us to view the poor? Jesus wants us to see the poor as treasures and potential friends.

Religion views the poor as a resource to be exploited, but grace compels us to see the poor as treasured people. Religion robs from the poor, but grace gives to the poor. Religion upends the words of Christ by telling the poor, “Give to the rich and you will have treasure in heaven.” It’s a disgrace.

Jesus reached out to the poor and he encourages us to do the same. “Give to the poor, invite the poor, help the poor.” It’s not that God loves the poor more than the rich, it’s that the poor are the low-hanging fruit. Unlike the rich, they haven’t been numbed by the false and fleeting comforts of this world. Aware of their needs, they are ready to meet the One who promises to supply all of our needs in Christ Jesus. The table of the Lord’s abundance has been laid for all, but only the hungry are grateful.

When you give a banquet, invite the poor, the crippled, the lame, the blind, and you will be blessed. Although they cannot repay you, you will be repaid at the resurrection of the righteous. (Luke 14:13–14)

People throw parties to socialize and get ahead. They invite others in the hope of getting something in return. But Jesus said we can also throw parties to make eternal friends. How? By inviting those who cannot pay us back. “Do that,” said Jesus, “and you will be repaid at the resurrection of the righteous.” How are we repaid? Through friends. Do you see? Those needy folk aren’t going to be needy forever. One day they will shine with glory, and they will thank you for sharing your life with them.

In the eyes of the world the poor have nothing to offer, but Jesus says “The poor are worth dying for.” That should tell us something. “God thinks you’re awesome, and so do I.”

Like Jesus, Paul eagerly gave to the poor (Gal. 2:10). He did not give out of religious duty or to put a shine on his reputation. He did it because he loved people and wanted to share the love of God with as many as possible.

Life is a gift that is easily wasted. We can waste it running after inferior rewards that rust, or we can do what Jesus and Paul did and invest ourselves in the only reward that lasts: people. There’s no better investment, and no better way to spend your life.

Did you know E2R readers just like you help the poor by funding the free distribution of grace resources? If you believe in this message of love and grace and want to see it go further, consider supporting us via our Patreon page. So far patrons have helped give away 20,000+ books and ebooks. We’re just getting started. Join us.