D. L. Moody, the great American evangelist, told millions of people about the love of God. But who told him? It was this guy… 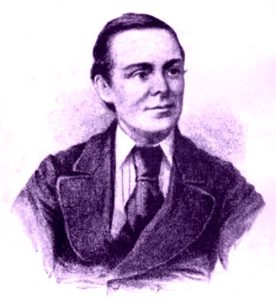 Henry Moorhouse may be the most prolific grace preacher you’ve never heard of.

Born in Manchester in the UK in 1840, the teenaged Moorhouse was a gang leader who battled depression. He carried a loaded pistol in his pocket not intending to shoot people, but for the purpose of blowing out his brains should he be struck with utter despair.

On a cold December night in 1861, while passing the Alhambra Circus in Manchester, Moorhouse heard noises coming from within. Thinking a fight was in progress, he charged in ready to enter the fray. However, it was a gospel meeting and the preacher was telling the story of the prodigal son. Moorhouse realized the story was about him and, when he heard the name of Jesus, it pierced his heart.

Long story short, Moorhouse became known as England’s boy preacher, on account of his youthful looks. He preached to millions in the UK and the US, and he gave away countless books and tracts.

Moorhouse met the great D. L. Moody at a crusade and invited himself to preach at Moody’s church in Chicago. At first, Moody gave him the brush off. But Moorhouse sent telegram after telegram until Moody acquiesced. “I’ll be out of town on Thursday night,” Moody told his staff. “Let him preach in my absence.”

When Moody returned home on Saturday morning, he asked his wife about the English preacher

“Yes, I liked him very much. He preached two sermons from that verse of John: ‘For God so loved the world that he gave his only begotten Son, that whosoever believes in him shall never perish, but have everlasting life.’ I think you will like him, although he preaches a little differently from you.”

“Well, he tells the worst sinners that God loves them.”

“I think you will agree with him when you hear him, because he backs up everything he says with the Bible.”

Thank God for Moody’s wife! She convinced her husband to hear Moorhouse, and on Sunday morning he heard a message that changed his life. Again the young Englishman preached on John 3:16. He went from Genesis to Revelation showing how God loves the whole world. “Up to that time,” said Moody,

I never knew that God loved us so much. This heart of mine began to thaw out; I could not keep back the tears. It was like news from a far country. I just drank it in.

Moody asked Moorhouse to preach again and the young Englishman stayed a week. Every night he preached on John 3:16 until that gospel message took root in D. L. Moody’s soul. “He just beat that truth down into my heart, and I have never doubted it.”

Supernatural power is released when we tell people that God loves them. Moody experienced this power first hand and it made him a new man. After Moorhouse’s visit, Moody began to preach a different gospel:

I used to preach that God was behind the sinner with a double-edged sword ready to hew him down. I have got done with that. I preach now that God is behind him with love, and he is running away from love.

If you’d like to learn more about the boy preacher who swapped a pistol for a Bible, check out my latest Classic Sermon on Patreon. It’s Moorhouse’s 1875 sermon, “The Good Shepherd,” which I have modified to make it more readable for a 21st century audience.

If you have been anxious or are looking for a word of comfort in these troubled times, find out what Moorhouse has to say about the Keeper of the sheep. Jesus is the Good Shepherd, the Great Shepherd, and the Chief Shepherd besides.

For the next few days, anyone who signs up as a supporter on Patreon will get the ebook. Being a patron is easy and cheap, and you can cancel at any time. Don’t like Patreon? Sign up as a monthly supporter on Donorbox at any level and I’ll send you the free book too. But this special offer ends next week.

Your investment will help others hear about the good news of grace! Who knows? You may even be a Moorhouse to the next Moody.