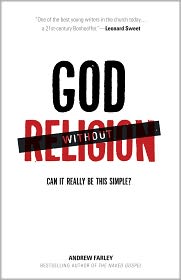 The problem with religion is that it comes naturally to us. Ever since our ancestors chomped on the forbidden fruit, we’ve had an innate sense of right and wrong that informs everything we do. Instead of trusting our heavenly Father, we trust our own religious instincts. Instead of walking by the spirit, we rely on our own judgment and willpower.

You could say that religion was Adam’s gift to the human race. Even if you’ve never been to church you were born thoroughly religious. You grew up with the idea that if you do good you’ll get good but if you do bad you’ll get bad. This is a law the whole world understands but it’s fruit off the wrong tree. It’ll have you promising, like the Israelites at Sinai, “just tell me what to do and I’ll do it.” But whether you succeed or fail at this way of life, death is the inevitable outcome (Gen 2:17).

Apparently four out of five Christians define spiritual health in terms of “trying hard to follow the rules in the Bible.” I got this figure from Andrew Farley’s recent book, God Without Religion. It’s a good book that seeks to drive a wedge between the old life we’ve all grown up with and the new life God wants us to have. Do you need to read this book? Well that depends on your response to the following statement (check all that apply):

Christians should look to the law;

If you selected any response from (a) to (d), then you need to read this book! It’ll set you free. The punch-line of this book is that Christians should have no spiritual relationship with the 10 commandments or indeed any rules or regulations. Try to keep the rules and you’ll end up disillusioned and burned out, just like Andrew Farley was before he encountered grace. If you’ve read his first book, The Naked Gospel, then you already know his story.

In God Without Religion, Farley picks up where he left off by showing how law-based religion sucks the life out of us. We are called to be ministers of a new covenant (2 Cor 3:6) but many of our habits (e.g., confession, tithing) come straight out of the old. In other words, we have settled for a way of life that the Bible calls inferior. If you want to know how we’re mixing grace with works this book gives many clear examples. Farley contrasts the old with the new in the context of giving, forgiveness, and holy living. He also tackles tricky subjects like predestination and discipline. If you’ve been brought up on a diet of religious mumbo-jumbo, you’ll find his clear-headed writing as refreshing as a mountain stream.

Indeed, clarity is sorely needed in this day and age. One reason many Christians stay enslaved to law-based religion is that they are confused about the words of Jesus. They say, “We should do everything Jesus said.” But as Farley explains, Jesus had two distinct ministries. In his first ministry he sought to bury the Jews under the true demands of the old covenant. He did this so that the law might fulfill its purpose of silencing the self-righteous and revealing our need for a Savior. However, Jesus’ second ministry revealed a new and better covenant to come. In parable and deed, Jesus revealed a new covenant based on His Father’s grace and subsequently forged in His own blood. If you fail to distinguish between the two covenants, you’ll get confused and end up mixing grace with works.

One part of the book that I particularly liked was Farley’s analysis of Romans 7. Like Paul in that chapter, many Christians find themselves struggling with sin and feeling wretched because of it. According to Farley, sin is what happens when we try to please God by keeping the rules. God introduced the law so that we might recognize the presence of sin. Sin thrives under law so the moment you start trying to live by law-based religion, sin is inflamed (Rms 5:20). You know what happens next: You fail, you repent, and you resolve to do better next time. In other words, you make a law for yourself that declares, “I must do better.” By the strength of your resolve you succeed for a time but eventually you fail again. Sin wins and back to square one you go. This ceaseless cycle of performance, failure and repentance is a surefire sign that you’re living under the curse of religion.

The way to break the cycle is to reckon yourself dead to sin and alive to God (Rms 6:11). You are not handicapped by a sinful heart and you don’t have a sinful nature. What do you have is an old way of thinking that needs to change. You need to renew your mind and start agreeing with what God says about you. He says you are a new creation with new appetites and desires. If you stop and think about it, you will find that sinning is actually something that you don’t want to do. As Farley says, this is significant:

“Now, I know what you’ve heard: sin is the stuff we want to do but aren’t supposed to do. What I’m saying is, that’s wrong. Sin is totally incompatible with who we are, and it’s the last thing we want to do… For the rest of our lives, we’ll continue to prove our new birth, one way or another. We’ll prove it by expressing Christ and being fulfilled, or by sinning and being miserable. Either way, we prove our true identity.” (pp.165-6)

Farley then goes on to tell an intriguing story about how on one day in 2005, “one hundred thousand people woke up Canadian.” (His book is full of good stories!) Similarly, it’s time for we Christians to wake up and realize who we are.

Farley covers a lot of ground in this book, but his main emphasis is on works versus grace. This is really Farley’s forte. If you want to read a good book on healing, I recommend Wommack. But if you want a solid foundation on the differences between living under law-based religion and living free under grace, you can’t go past Farley.

38 Comments on “God Without Religion” by Andrew Farley