Whenever I tell people that God is good and he is not the One making them sick nor is he responsible for the bad things going on in the world, I can guarantee that I will get two cynical responses. (1) “Tell that to Job,” and (2) “That’s not what is says in Isaiah 45.”

As I have looked at the foolish words of Job elsewhere, today I want to look at the words of Isaiah:

I form the light, and create darkness: I make peace, and create evil: I the Lord do all these things. (Isaiah 45:7)

This is a stunning verse – as we shall see – but it has been used for terrible purposes. “Have you got cancer? God did it. Lost your child? God needed another angel in heaven. There was another school shooting? A deadly earthquake? A devastating hurricane? God ‘allowed’ these things to happen, for he is the author of both good and evil.”

What nonsense. We are supposed to “Ascribe greatness to our God” not evil. His work is perfect and just, not imperfect and bad (Deu 32:3-4).

If you want to know what God is like, look to Jesus who is the exact representation of his being (Heb 1:3). To how many people did Jesus give sickness? When did Jesus ever comfort a grieving parent with useless words? Get your picture of God from Job and you will think that God gives and takes away. But the God Jesus reveals only gives good gifts, and he never takes back what he gives us.

So what do we make of these words of Isaiah about God creating evil? Let’s read them in context:

This is what the Lord says to his anointed, to Cyrus… (Isaiah 45:1)

When Cyrus the Great arrived at the gates of Babylon in 540BC, he was welcomed by 40,000 Jewish captives as a liberator. One of them handed Cyrus a letter that had been written 150 years previously by the prophet Isaiah. The letter contained the words of the Lord to a man from the east (Is 41:2) – a man who did not know the Lord, but who had been summoned by name:

This is what the Lord says to his anointed, to Cyrus… I summon you by name and bestow on you a title of honor, though you do not acknowledge me. (Isa 45:1,4)

Imagine getting a personally-addressed letter from the Lord written when Abraham Lincoln was president! A letter like that would get your attention.

In the letter God identifies Cyrus by name, calls him “my shepherd,” and says he will rebuild Jerusalem and the temple. According to the historian Josephus, when Cyrus read these words:

An earnest desire and ambition seized upon him to fulfill what was so written; so he called for the most eminent Jews that were in Babylon, and said to them, that he gave them leave to go back to their own country, and to rebuild their city Jerusalem, and the temple of God. – Antiquities of the Jews, 11.1.2

Cyrus is a huge figure in the Old Testament. Not only did Isaiah write to him before he was born, but he’s mentioned in Ezra, Daniel worked for him, and he was instrumental in the fulfillment of Jeremiah’s prophecies regarding the restoration of Israel. 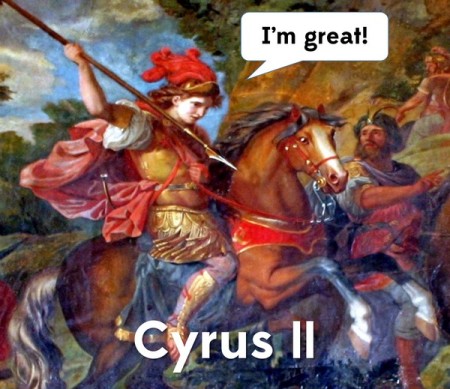 So the first thing to note about Isaiah 45:7 is that these words were not written to you, but to an ancient Persian. This is very important because God talks to this Persian in his language not your language. He uses concepts Cyrus understands but which are foreign to you. Let me explain.

The Persian was not raised with a Judeo-Christian heritage. He was oblivious to the God of Israel. So how does God introduce himself? Not as, “The God of Abraham, Isaac, and Jacob,” for that would’ve meant nothing to Cyrus. Instead, he uses words and phrases that would have made sense to someone raised under the dualistic religion of the Persians. According to Adam Clarke,

It was the great principle of the Magian religion, which prevailed in Persia in the time of Cyrus, and in which probably he was educated, that there are two supreme, co-eternal, and independent causes always acting in opposition one to the other; one the author of all good, the other of all evil. The good being they called Light; the evil being, Darkness.

Persians believed that the affairs of men were governed by two opposing forces, good and evil, light and dark. “Nope,” said God to Cyrus. “It’s just me. I am the Creator of all.”

I bring prosperity and create disaster; I, the Lord, do all these things. (Isaiah 45:7, NIV)

The Persians brought disaster to the Babylonians and prosperity to the Jewish exiles, but God wanted Cyrus to know who was behind it all:

I will go before you and make the rough places smooth… So that you may know that it is I, The Lord, the God of Israel, who calls you by your name. (Isaiah 45:2-3, NASB)

If it hadn’t been for this letter, Cyrus might have thought he was The Man. But on account of this letter Cyrus recognized that he was but a player on a stage directed by the God of all.

This is what the Lord says… who carries out the words of his servants and fulfills the predictions of his messengers, who says of Jerusalem, “It shall be inhabited,” of the towns of Judah, “They shall be rebuilt,” and of their ruins, “I will restore them” (Isa 44:24-26)

The words of Isaiah are simply stunning. They literally changed the course of history. They prompted Cyrus to free the Jews and fund the restoration of Jerusalem.

But you have to wonder what went through Isaiah’s mind when he wrote them. “Rebuild the temple?” It hadn’t yet been destroyed. “Inhabit Jerusalem?” What disaster is about to fall on Judah? “God creates evil?” But God is good!

Woe to those who call evil good, and good evil; Who substitute darkness for light and light for darkness; Who substitute bitter for sweet and sweet for bitter! (Isaiah 5:20)

Don’t let anyone tell you that God is both good and bad, sweet and bitter. Don’t believe the lie that says he is responsible for the bad things going on in the world. He isn’t. Light has no fellowship with darkness. God is all the time good.

Everything here is free thanks to readers like you. Support E2R on Patreon (USD) or Donorbox (other currencies) today.