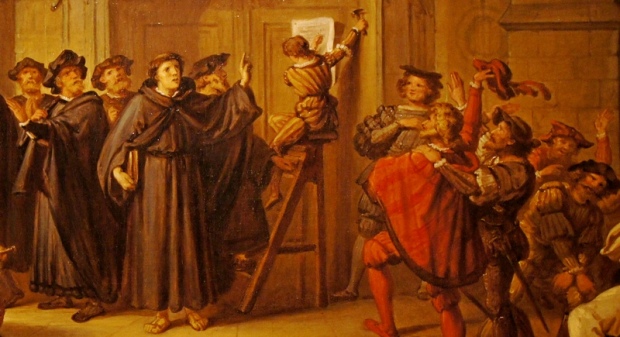 This year marks the 500th anniversary of the Protestant Reformation. On October 31, 1517 that Martin Luther nailed his 95 Theses to the door of All Saints’ Church in Wittenberg.

The Reformation that Luther and others started led to a whole new way of thinking about God, church, and the proper use of the law. In the Formula of Concord, the Lutheran Statement of Faith, the three uses of the law are summarized as follows:

The Law was given to men so that (1) men may have knowledge of their sins, (2) wild men might be restrained, and (3) after they are regenerate they might have a fixed rule to live by.

According to the Reformers, the law is a mirror, a restraint, and a guide. Since this is the quincentennial anniversary of the Reformation, it is a good occasion for us to discuss these three purposes.

Is the law a mirror?

Yes. The law is a mirror that reveals our true state apart from God. It shows us our sin. Paul the former chief of sinners said, “I would not have known what sin was had it not been for the law” (Rom 7:7).

We may think of ourselves as decent people, but the good and holy law reveals that we all fall short of God’s perfect standard. Thus, the person who most needs the law is not the lowly “sinner” – he already knows his state – but the moral superstar who thinks of himself as better than his neighbors.

This is why Jesus preached the law to religious people. They were lost but didn’t know it. They needed the mirror of the law to the cancer that was already there. “Once I was alive apart from the law; but when the commandment came, sin sprang to life and I died” (Rom 7:9).

Sin is fatal but you won’t know it if you don’t see it. The law helps you see.

Is the law a restraint?

Not really. The law does not change the hearts of men, but through fear of punishment it can restrain the outbreak of sin.

If you knew that you could be stoned for adultery, you might think twice about breaking the 7th Commandment. But that won’t stop you thinking about it and since thinking about it is as bad as doing it (see Matthew 5:28), the law doesn’t really curb sin.

Indeed, the law actually inflames sin, and this is not widely understood.

I would not have known what coveting was if the law had not said, “You shall not covet.” But sin, seizing the opportunity afforded by the commandment, produced in me every kind of coveting. (Romans 7:7-8)

Paul did not realize he had a problem with coveting until the law told him not to do it. It’s like those youth groups that rail against fornication until everyone’s thinking about the very thing they’re not supposed to be doing.

“The strength of sin is the law” (1 Cor 15:56). The law doesn’t empower you to overcome sin; it empowers sin to overcome you. This is why the church has no business preaching law as a restraint. Using the law to restrain sin is like putting out a fire with a bucket of kerosene.

Is the law a guide for Christians?

Absolutely not. Jesus said the Holy Spirit would teach you everything you need to know (John 14:26). He will “guide you into all truth” (John 16:13). The Christian is to be guided by the living Spirit of Christ, not the dead rule of law.

The law is not your friend, helper, or teacher – Jesus is. To say “the law is my guide” is to say “Jesus was wrong” or “the Holy Spirit cannot be trusted.” And don’t fall for that old chestnut that says the Holy Spirit guides or convicts us with the law. He’s the Spirit of grace not law.

We make an idol of the law when we turn to it for guidance and direction. There is nothing wrong with the law – it is holy, righteous and good. But try to live by it and you fall from grace and cut yourself off from Christ.

So what are the three uses of the law?

According to scripture the law serves at least three good purposes:

Ultimately the law is a guardian (not a teacher) that leads us to Jesus so that we might be justified and sanctified by faith in him.

For Christ is the end of the law [the limit at which it ceases to be, for the law leads up to him who is the fulfillment of its types, and in him the purpose which it was designed to accomplish is fulfilled. That is, the purpose of the law is fulfilled in him] as the means of righteousness (right relationship to God) for everyone who trusts in and adheres to and relies on him. (Romans 10:4, AMP)

In a word, the law is a signpost. And like any signpost, it only has value in that it points to a place we need to go.

So thank God for the law that does not restrain or guide us but points us to Jesus who is the way, truth, and the life.

71 Comments on The Three Uses of the Law