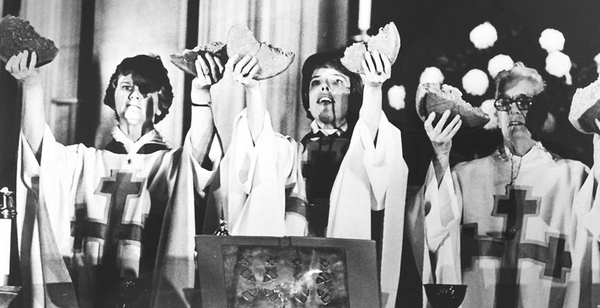 I have three daughters. When they get a little older and start drawing the attention of young men, I will give them this piece of timeless advice: Don’t just listen to what he says; watch what he does. A man may say anything, but his actions will always reveal his heart.

This is good to remember when we come to scriptures regarding women in the Bible. For instance, did Paul really believe that women must not teach and that women should remain silent in church?

Many people think he did, and this has given rise to three lies that are harming the church: Women must remain silent, women can’t teach, and women can’t lead.

What did Jesus think? And what about the other apostles? What were their views on women in ministry?

We can debate the meaning of specific scriptures, and we’ll get to 1 Corinthians 14 and 1 Timothy 2 in coming posts. Or we can look at what woman did in the Bible.

Were there women in the Bible who taught, spoke in church, and led men? There were plenty!

If the women listed above had believed the nonsense taught about women in ministry today, none of them would’ve made it into the Bible.

I commend to you our sister Phoebe, who is a servant of the church… for she herself has also been a helper of many, and of myself as well. (Rom 16:1-2)

Ah, good ol’ reliable Phoebe. She gives insecure men a comforting picture of women in leadership. “She’s a deacon, nothing more, and if that’s good enough for Phoebe it ought to be good enough for any woman.”

I confess that as a pastor I spoke about Phoebe the helper far more than I spoke of Junia the apostle or Priscilla the pastor. I was comfortable with Phoebe, but Junia worried me (was she really an apostle? was she a he?), and Priscilla-with-the-pants made me uneasy. (Why was her name always listed before her husband’s?)

Thank God I’ve been freed from my insecurities!

Look again at what Paul says of Phoebe. He calls her a helper, but that is a limp translation of his words. It gives us the impression that Phoebe waited on tables or kept the babies quiet while the men preached.

What Paul really said is that Phoebe is a “succourer of many.” The word is derived from prostatis which means a female guardian, protectress, or patroness. Phoebe was literally “a woman set over others.” She was not a waiter but a patron, a leader, a bona fide mother in the church.

(And if you think being a mother is somehow an inferior form of leadership, you haven’t read how Paul described himself in 1 Thessalonians 2:7.)

In the coming articles we will look at the difference between what Paul wrote and what people think Paul wrote about women in the church. But before we consider what Paul said, it is helpful look at what Paul did.

And what Paul did was encourage women to speak and prophesy and lead.

Everything here is free and ad-free thanks to readers like you. Support E2R on Patreon (USD) or Donorbox (other currencies) today.

120 Comments on Women Preachers? Where’s that in the Bible?!