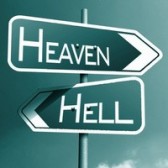 I have never written about hell and once this series is done I may never write about it again. Fact is, unless you are a smug, self-righteous, look-at-me-God-I’m-impressive kind of law-loving wing-nut, you don’t need to know anything about it. What you do need to know is the good news.

Problem is, many of us have been given a mixed up version of the good news. We’ve been told that we have to perform, jump through hoops, and generally earn God’s favor. And if you believe that it will totally mess up your view of wrath, judgment and hell.

Let me state plainly that no one goes to hell for their sin. Your sin – or Adam’s sin, if you like to think historically – has not been the issue since Jesus judged all sin on the cross (Heb 9:26). Hell is not for sinners; grace is for sinners (Mk 2:17).

Personally, I think it’s a waste of time debating hell but since so much time has already been wasted, permit me to fling the cold waters of scripture onto the flames of groundless debate. Here is what we have covered so far:

–    The flames of debate – see Part 2 for what some think hell is like
–    The cold water of scripture – see Part 1 for what Jesus et al. actually say about hell

As I said at the beginning, I am open to being wrong about hell. It’s not essential we get this right to win favor from God. However, being wrong about hell may affect our witness. For two-thousand years the church has preached hell. To tell people now, “We were wrong the whole time – there is no hell,” surely affects our credibility.

Every first-century preacher, from Jesus to John, spoke about eternal condemnation. If 20 centuries later we come along and say “hell ain’t real,” or “hell is temporary,” then the message has changed. We are no longer on the same page.

And the message most definitely has changed. As we have seen, there is a growing acceptance of what I call the sentimental view of hell, which looks like this:

“Hell doesn’t exist. If it does exist it’s not that bad – it’s actually a blessed place located somewhere inside Jesus.”

This sentimental view of hell is a fiction, but for some it is a compelling fiction. Why do people choose to believe it? There are at least 12 reasons why a sentimental hell appeals. For my money, all of them are debatable. Here they are:

1. The traditional view of a fiery hell makes God out to be unchristian and unloving

God paid a huge price to make hell totally unnecessary. He came and died for us and there is no greater love (John 15:13). Within the constraints of love and freedom, God has done everything he can to stop us following the devil to hell. What more can he possibly do?

2. The traditional view suggests God does worse things to his kids than we do

It may be convenient to blame God for every bad thing that happens but it is naive. On Judgment Day we will all give an account for what we have done (Rom 14:10-12), not for the things that have been done to us. Adam wasn’t a victim when he chose to go his own way and neither are we. God doesn’t do bad things to his kids but we are more than capable of doing bad things to ourselves – in spite of all the good God has done for us.

3. The English word “hell” is not in the Bible

Actually, there are no English words are in the Bible. The Bible wasn’t written in English.

And that’s good because…? Jesus used Gehenna as a picture of eternal condemnation because hell was largely alien to the Jewish mind. They were worried about physical death and sheol. Jesus explained that there were worse things than dying, like having both your body and soul destroyed (Matt 10:28).

5. Why would a good and loving God feel good about sending people to hell?

Who says God sends anyone to hell? Who says he feels good about it? This is a leading question and a ridiculous thing to ask.

Jesus wept over the imminent fall of Jerusalem saying, “How often I have longed to gather your children together, as a hen gathers her chicks under her wings, but you were not willing” (Mt 23:37). Can you see Jesus weeping, bawling his eyes out on account of their hard-hearted unwillingness?

If Jesus wept over Jerusalem he will surely weep over hell and those he longed to gather but “were not willing” to be gathered. God doesn’t send people to hell; they send themselves. The woes that Jesus pronounced over Jerusalem were woes brought on their own heads. Writing in The Great Divorce, C. S. Lewis nailed it when he said:

Except when it doesn’t. Love that forces itself on the unwilling is not love. If God didn’t stop Adam from condemning himself he won’t stop us from condemning ourselves (John 3:18). Indeed, he cannot without acting contrary to his essential character.

7. The ungodly have a distorted view of God. When they see him as he truly is, they will love him

This is wishful thinking. Unfallen Adam had a clear and undistorted view of God yet he still chose to distrust him. Prior to the cross Adam knew God better than anyone. Yet through his actions he declared God to be an untrustworthy liar. With the benefit of hindsight this strikes us as an incomprehensible error of judgment but it happened nonetheless.

The distorted lens problem is solved by Jesus. Jesus is God explaining himself to the human race. If you have seen Jesus, you have seen God. Reject Jesus and you reject God.

8. God is sovereign – in the end he gets what he wants

By that logic God must also be the author of evil, but he isn’t. God is not sovereign in the sense that word is typically used. It was not God’s will for Adam to eat from the forbidden tree yet Adam ate. It is not God’s will for anyone to reject his love, yet some do.

God certainly wants no one to go to hell, but he doesn’t always get what he wants. Here’s a quote from Wommack that caused a stir on E2R’s FB page recently:

God doesn’t allow people to go to hell. In one sense, you could say that he allows it because of his high regard for our free will. But it’s not his desire, wish or plan. God puts roadblocks in our way inviting us to repent and be born again, but ultimately he gives us the choice. God doesn’t control us like pawns in a chess game. Anyone who goes to hell has to climb over mountains of obstacles the Lord placed in their path. ~God Wants You Well, p.73

Indeed he does! But it does not follow that all are saved. This is not the “how much more” that Paul spoke of in Romans 5. More here.

And indeed he does. But it does not follow that all are drawn. Light has come into the world but some prefer the darkness (John 3:19).

11. Every knee shall bow, every tongue will confess, therefore everyone will be saved

Every knee bows because Jesus is the king of kings. Some bow in adoration, others in willful defiance.

12. Jesus is the shepherd of the goats too

And look what he says to them: “Depart from me.” The goats don’t come in but are permanently “shut out” from the presence of the Lord (2 Th 1:8-9). The Good Shepherd surely loves the goats but in the end he declares the goats are “cursed” (Mt 25:41). Jesus didn’t curse them; they cursed themselves by rejecting life and grace.

As we have seen, the sentimental view of hell is not supported by scripture, history, or logic. It simply makes no sense. We might as well say that up is down and the moon is the sun. We might as well take a knife to all those New Testament scriptures that speak of eternal condemnation.

But I do agree with the sentimentalists on one point and it is this: Hell has really messed up our evangelism.

“If hell were true,” they say, “Then why aren’t we knocking down doors and warning people?” I think the answer to that is, “We’ve tried that and it doesn’t work.” Sure, it’s easy to sell salvation insurance to those who are fearful of hell. But it never sticks. The threat of hell is a lousy way to reconcile the lost to their loving Father.

But the solution is not to rewrite the Bible and pretend hell isn’t real or that the goats don’t choose to go there. That’s tantamount to calling Jesus a liar. The solution is to preach the gospel.

And the gospel is not “turn or burn” or “come to Jesus and escape hell.” Jesus didn’t die merely to save us from hell. Avoiding hell is not the point.

The fact is, hell was never meant to be part of our story. Hell is the ending we choose for ourselves when we reject the infinitely better ending God wants for all of us. And this is what we must proclaim in our witness – not the bad news of hell-in-the-future but the good news of heaven-on-earth-here-and-now. This is the gospel of the kingdom.

130 Comments on 12 reasons why a sentimental Hell appeals